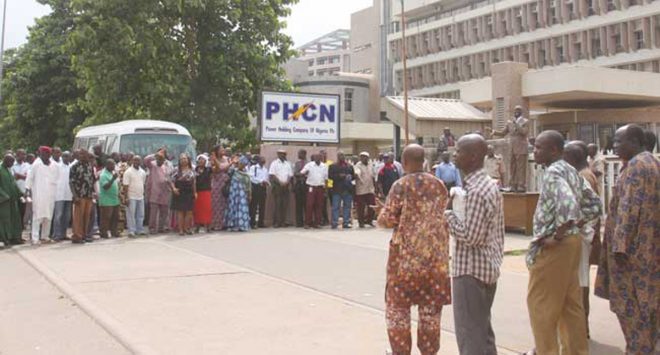 The union members at the wee hours of the day locked staff of the distribution companies out and prevented them from gaining access to their offices.

Mr Joe Ajaero, President, NUEE, said that the workers organised the action to draw the attention of the government to the challenges facing electricity workers in the country.

He said the union was impressed with the conduct of its members.

“Compliance was 100 per cent and we are continuing tomorrow until government listens to our demands.

He said that power distribution in their areas of operations would be affected if the situation persists.

“This is going to affect the economy of this country and we are appealing to the government and labour to urgently resolve the issue,” he said.

Also, Mr Olusola Ayeni, Corporate Communications Officer, IE, pleaded with NUEE and the government to find an amicable solution to the issue in order not to disrupt power supply nationwide.

The  union had vowed to go on a nationwide strike after the 21-day ultimatum it issued to the Minister of Power, Mr Saleh Mamman expired.

The union in a statement, signed by its President, Mr Joe Ajaero, had accused the Bureau of Public Enterprise (BPE) of failing to address and pay up over 2,000 disengaged workers of the Power Holding Company of Nigeria (PHCN) since 2013.

It said alleged underpayment of severance of over 50,000 ex-PHCN staff and illegal transfer of schools built by the union to investors.

The union accused GENCOS of refusing to sign Condition of Service and rules of engagement, adding that some DISCOs were also denying the retirement benefits of some electricity workers.

It said the strike was the only option left for the union as the Federal Government had failed to dialogue with them to find lasting solutions to the lingering issues in the sector.