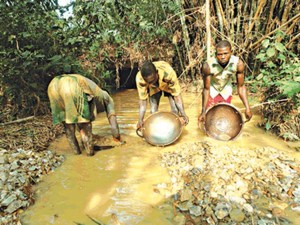 AS the President Muhammadu Buhari’s administration is about to end its first four years on May 29, 2019, gold miners in Zamfara State are lamenting their inability to access the N30 billion mining intervention fund provided to boost activities of operators in the mining sector.               This was the concern of the Chairman, Miners Association of Nigeria (MAN), Zamfara Chapter, Sani Shinkafa, while speaking on conditions attached to accessing the fund at the Bank of Industry, (BoI), which was approved by the Buhari-led administration. Although, Shinkafi commended the approval and effort of the government to fund the sector along with other interventions made to fast track development of the sector, but called on BoI to consider requirements given, which he described as “cumbersome.” Over 93 countries in talks with FG on investing in solid minerals sector   The fund was approved by Buhari during the Federal Executive Council meeting (FEC) in October 2016. He said: “It is during President Muhammadu Buhari’s administration that N30 billion mining intervention fund to develop the mining sector was approved. It is also in their tenure that World Bank agreed to fund the sector with $150 million for the development of the mining sector and also it is their tenure, the Buhari administration decided to give intervention funds for artisanal and small scale minors. “The criteria for accessing the loan are so cumbersome and our miners cannot access the funds and that made our members to abandon it and start scouting for private financing. “They make it so difficult for small scale and artisanal miners to access those funds because they give loan ranging from N10 million to N100 million if you are to access it, you have to have this collateral and it is very difficult.” He urged the Federal Government and the BoI to revisit and consider a downward review of the requirements to meet before accessing the loans. “We need the government and the Bank of Industry to revisit and reduce their condition so that miners and small scale miners can access the funds because you cannot expect a miner to give you collateral when he goes to seek for a loan, somebody who stays in a remote place what collateral will he have to access loan?” Meanwhile, the National President (MAN),  Mr.Sani Shehu, disclosed that the association is talking with BoI on the issue, and expressed hope that members will soon have access to the fund. But Shehu stated: “I also want to say that if the right people in the industry are targeted, if we have the disbursement of this fund as and when due, miners will contribute more to the Nigerian GDP, as it is funding challenge that has been bedeviling the sector in terms of acquiring machineries and all levels of mining activities.” He also added that, “If the right people are carried along, the mining sector is going to be a vibrant sector capable of creating massive employment for the people, as well as sustainable revenue generation for the government in terms of foreign exchange.”