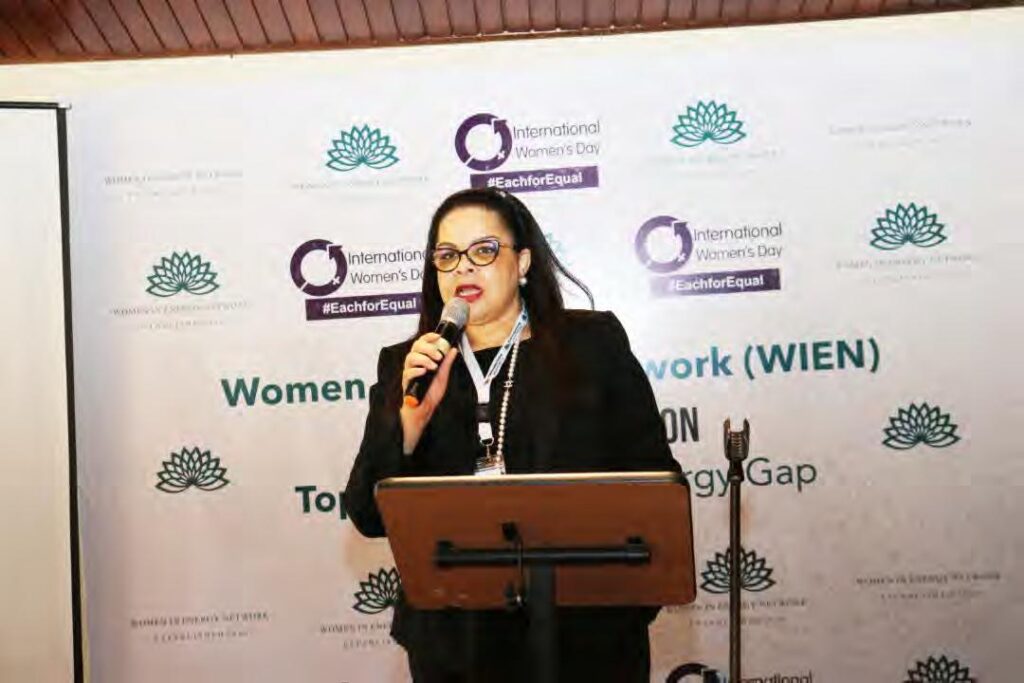 Despite women making up 22 percent of the oil and gas workforce globally, as well as 27 percent of entry-level and 17 percent of senior-level positions, they account for just 1 percent of the Chief Executive Officers’ positions in the industry, the Managing Director/CEO of AFTRAC Limited and Co-Founder, Women in Energy Network (WIEN), Patricia Simon-Hart has said.
Making a presentation on “Solutions Towards a Gender Diverse & Inclusive Oil & Gas Industry” at the just-concluded Angola Oil and Gas Service and Technology Conference, Simon-Hart said, “There are fewer women in oil and gas jobs than almost any other major industry, accounting for less than 22 percent of employees in the sector worldwide – and these figures grow smaller the  higher up business ladder you go.”
Citing the World Bank Gender  Data Portal, she said that 1 in 3 businesses globally are owned by women; female participation is higher among newly registered firms; men are more likely to save or borrow to start, operate and expand businesses than women; and there is difficulty locating data on women-owned oil and gas businesses.
Simon- Hart identified lack of data, mindset, lack of awareness, challenges accessing credit, access to opportunities, risk averse, and absence of role models as some of the key barriers affecting women’s participation in the oil and gas business.
Also citing the African Development Bank (AfDB), she said that the extractive industry accounts for only 1 percent of Africa’s labour force. Based on Nigeria’s Extractive Industries Transparency Initiative  (NEITI) estimation, she said that women make up only 18 percent of the workforce in the extractive industry in Nigeria, adding that 58 percent of women are self-employed or entrepreneurs in Sub-Saharan Africa.
She noted that Nigeria leads the way with the highest percentage of new female-owned firms. She, however, informed that there is no data on women-owned oil and gas businesses.
“While women in Africa make up a considerable percentage of entrepreneurs, the oil & gas sector continues to lag behind. Only a few have managed to transcend the barriers and unconscious biases to participate in the value chain. And those that do, remain as SME’s,” Simon-Hart noted.

“There are fewer women in oil and gas jobs than almost any other major industry, accounting for less than 22 percent of employees in the sector worldwide – and these figures grow smaller the  higher up business ladder you go.”

She suggested creating awareness to confront unconscious bias as the first step to addressing it.  According to her, there is a need to include gender in local content policies.

extractive industry accounts for only 1 percent of Africa’s labour force.

“Creating an enabling institutional framework to reduce competition with larger suppliers and contractors; setting mandatory requirements for contractors to employ women;  requirement for supply chains to set targets to include women-owned business (WOBs) as contractors; creating incentives for subcontracting to WOBs; promoting joint venture alliance that include WOB; information sharing with a focus on creating opportunities for WOBs,” she said.
Acknowledging emerging opportunities in the industry, Simon-Hart said, “The sector is becoming more mechanized and less reliant on heavy manual labour. Emerging digital technology and the IoT is paving a way for more technical roles for women.”
She advocated for the establishment of a baseline on gender diversity and inclusion for Africa; initiation of women in oil and gas programs; and setting up of goals and targets across the oil and gas supply chain.
Others include creating formal mentorship programmes for women in business; creating awareness and training to address unconscious bias; and mapping opportunities with available competence.

Emerging digital technology and the IoT is paving a way for more technical roles for women.”

The Fourth Industrial Revolution, Disruptive Digital Technologies, and the Need to Regulate ‘Our Common Enemy’