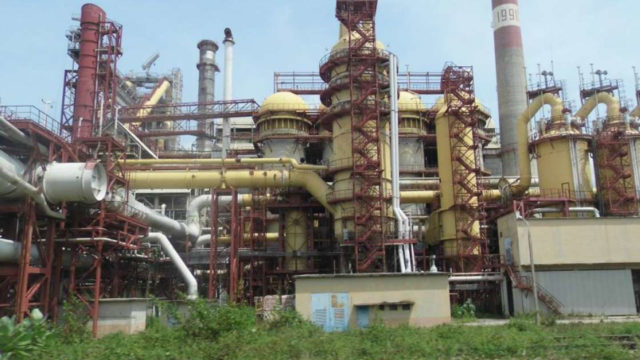 We have not given up on the Ajaokuta Steel Plant – Adegbite

The Minister for Mines and Steels Development, Engr. Olamilekan Adegbite, has said that although works on the Ajaokuta Steel Plant was stalled owing to the COVID-19 pandemic, the President Buhari led admiration has not totally given up on the project.

The Minister who made this known in a recent interactive session with journalists in Lagos also intimated the public on a number of projects being carried out by the ministry to fast-track the development of the value chains in the mining sector. Below are the excerpts:

What is the update on the rehabilitation of Ajaokuta Steel Plant?

It is always good to let the people know what we are doing even when these things are not obvious. We have had some misfortunes especially since I came to office. We started out very well with the promise to achieve certain goals from inception. The advent of the COVID-19 pandemic put a lot of our plans in abeyance, chiefly the Ajaokuta Steel Plant. It was one of our major targets to achieve that. Our target was to start the Ajaokuta plant before President Muhammadu Buhari will leave office. We went to Russia in 2019 and shortly after I became a minister in October 2019, when we had the Russian African Summit, and on the sideline of that summit, we had bilateral talk with the Russian Federation. One of the proposals or requests put forward by our Nigerian side was for the Russian Government to help us resuscitate the Ajaokuta plant, especially been that they were the original builders, and they acceded to that request. Work started in earnest from that October; a lot of paper works went back and forth which was supposed to lead to what you call a technical audit that was supposed to take place last year March. The technical audit is a 90-day exercise where you have professionals on ground to look at the plant the way it is and to look at what needs to be replaced, what needs to be changed. But as God will have it, the pandemic set in and even as we speak, with waves after waves, the Russians are yet to come. The 60-man team that was supposed to come down, we have prepared for them accommodation and transportation, everything is intact.

Has the government given up on that?

We have not totally given up on it. I’m praying and hoping we could start something that would become irreversible; because the plan given to us possibly is about two and half year’s thing. So, we thought starting from 2020, which means by the end of 2022 or middle of 2022, we would have finished. So, we are thinking the opening will start around 2022 third quarter. But if we were to start again, I don’t think this government has up to two and half years to go, but I pray and hope that we will be able to start something that is irreversible so that even if President Muhammadu Buhari has left office, the Ajaokuta Steel plant we still come on and Nigeria will be better for it.

What project is the ministry currently carrying out to enable the mining sector survive post COVID-19?

Data is critical in investors’ business decision. So, what is the ministry doing to avail prospective investors in the nation’s gold sub-sector all the relevant information they need as they decide on whether to invest in the country or not?

So, this year and into the following years, our exploration project -National Integrated Mineral Exploration Project (NIMEP) has been on course. NIMEP came on board because mining is all about data, gathering data and this is data that you offer to some interested people. It’s not good enough to say I have gold. People want to know the quantum of your gold and whether it’s worth their time and investment. If it will cost you about $200 million to get to where the gold is and you find out that the gold there is worth just about $150 million, it’s a loss. So, if I have an idea that the gold deposit there is worth about $10 billion, then I can spend my $250 million going after it. This is data that we need to acquire in other to attract the right investors and that is the programme we are doing all over the country. It’s a N15 billion project, about $50 million as at that time and the results are coming true; it’s looking very promising. In fact, when we went to Canada last year, before the onset of the pandemic and when we were in South Africa in February, these are the data we were marketing to investors and there were a lot of interests. People were already asking to come to Nigeria and all that but for the pandemic. Though, we hope to continue to market this data so that people can come. This data will not be free; it will be put in a bid auction because we have spent so much money. So, we need to recoup the money and use the money in doing further exploration.

What effort are you making to develop the country’s gold refining capacity and improve the value of the gold resource to the economy?

Most of the gold that is used or that you found around that is used to make jewelry and all that; they are from the door bars. Door bars is about 93 per cent purity, but when you want to take gold as a measure of wealth as is recognized intentionally, you have to take to what is called bullion standard. That is the gold standards they called 99.99 that is bullion. You would recall that sometimes in August last year, we presented bullion to President Buhari at that time. That was a proof of concept to show that yes, we have gold in Nigeria and we could take it to the bullion level; the bullion is what the CBN or even an individual can keep. If you have bullion now, you can know the value from the price quoted on the New York Exchange, price of gold is quoted daily. If you have one bullion, you know that the one we presented to the president was worth about N168 million for 12.5kg. We gave it to the president and the CBN purchased it and did a presentation of the cheque that the CBN governor gave to the president and there was a big dummy cheque that was made for that. So that is gold from Nigeria which was sold to CBN and the CBN said, wow! Nigeria can add to its foreign exchange level not just through oil and gas but through gold; not in door bars but through bullion. Putting that bullion in the vault of CBN increased our foreign exchange reserve. So that is another thing we are trying to do. That particular bullion, the final leg of it to take it to bullion was done outside the country, it was done in Turkey. Now, we have licensed two institutions. The third one is just recently licensed so that one is just starting. But two of the people that we licensed to build refineries in Nigeria have gone far: one is in Abuja, and one is in Mowe, Ogun State. This people will be able to refine gold to bullion standard and of course, individuals can buy gold. If you want to keep your money in gold, may be because you think inflation rate is going so fast and you want to keep your money instead of the cash, you can keep it in gold; that is legitimate. You can put it in a save in your home or if you are afraid thief may come, you can keep the bullion in a vault in the bank. And of course, the value, like the one I was saying was N168 million that the CBN paid for, it was very good for CBN because within a few months, prices of gold went up and it became about $250 million because price of gold kept moving per ounce. Because the price of gold is measured in ounce and it went up to about 2200 per ounce at the stock exchange. What CBN bought essentially with about N168 million went up within a few months to about N250 million at the time. That is gain for the country because if we had kept that cash, you would still have the same value (the N168 million). But by putting it in gold, you have enhanced the value of that cash to about N250 million. So’ it’s also part of the things we are trying to do. When the refineries come up, they will be able to refine gold locally. Like I said, the one that was given to Mr. President, the final leg of it was melted to get to door bars but we were able to take it to bullion standards in Turkey. We sent the door bars to Turkey; they did for us and then they sent it back and then we presented to the president. We have licensed three refineries in Nigeria which will be able to do these bullions for us in Nigeria. So, these are some of the things we are pursuing for this year and, hopefully, like I said, before we leave office, we will be able to give you a good account of our time in office.