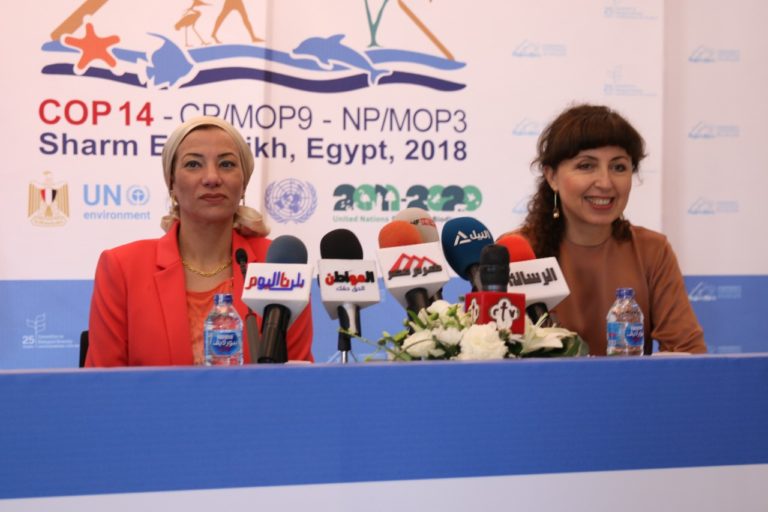 Dr. Yasmine Fouad, the minister of the environment has held a press conference in the presence of Dr. Cristiana Paşca Palmer, the executive secretary of the United Nations Convention on Biological Diversity, in which the minister displayed there under the technical and logistic elaboration relevant to the Conference of Parties (COP 14), that will be held as of 13 to 29 November 2018, in Sharm El Sheikh.

In the same vein, Dr. Yasmine Fouad, the minister of environment, has confirmed within the press conference, the importance of clarifying the concept of biodiversity and how does it reach a citizen, Whereas such concept includes all the existing surrounding the life of the human who does live therein, Moreover, The minister confirmed the mobilizing of public opinion for being aware of biodiversity importance and the effect thereof to the human lives.

Certainly, the minister ensures the ministry’s efforts during the remaining weeks for launching the conference and the contribution of the interested parties, especially the media for awareness and to promote the conference and issues will be discussed therein. Further, she affirmed the importance of every individual’s role, whether from media or youth or students as well as the private sector and officers of the five involved sectors that will be discussed throughout the conference including the Energy sector, Industry, Mining, Health, and Housing, as well as governments’ representatives, parliament, and civil society. She said “we will feel the success of every step at the beginning of the conference”.

The minister indicated the presence of Dr. Palmer, the executive secretary of the convention, demonstrating the interaction between the convention’s secretariat and the Egyptian media, and the important role of the media to promote the biodiversity’s issue in the critical time of convention’s life in which a roadmap for the post-2020 biodiversity framework is developed.

Similarly, the minister confirmed Egypt’s full ability and willingness to presiding over the largest convention. Where as Egypt previously had succeeded on the presiding of the African environmental ministers’ conference at a critical stage in light of the Paris negotiations on climate change.

At the same time, the minister confirmed the concerns of the political leadership in the issues of environment, throughout the participation of H.E Abdel Fattah El Sisi, the President of Egypt, in numerous events and conferences relevant to the environment, which are granted the top priorities, by the government, in Egypt’s actual agenda.

Besides, the Minster of environment thanked the secretariat of the convention for their support to Egypt, during the past two years, covering all the requirements. Moreover, the minister desires to complete the roadmap to show Egyptian’s vision, affirming that Egypt is to lead the word in this convention and seeking the initiative to link the three conventions of (Biodiversity, Climate Change and Desertification) to ensure the proper way for sustainable development and benefits not only on the national level, but to implement the goals of sustainable development worldwide.

Dr. Cristiana Palmar, the executive secretary of the Convention on Biological Diversity, on her part, said that Biodiversity means life of all beings on the earth, especially human who cannot work or breathes without the nature. The biodiversity does not mean to protect some types and creatures from the extinction, however, it means to build the infrastructure to create a happy life for humans.

Cristiana Palmar added to her statement, when Egypt seeks to host the conference’s event, it will reflect the Egyptian concerns in investment in humans and the environment to be linked to economy and social development.

Cristiana Palmar confirmed also that Egypt has a great history and natural capital, which it can attract more tourists thereto, Palmer is highly commended statutes enacted by Egypt in the recent period to conserve the natural resources, such as natural protectorates law. Furthermore, she confirmed the leading role of Egypt in the world and realizing lots of achievements during the two years of Egypt’s presidency of the conference until the takeover to Beijing 2020, in which it will establish a new frame for biodiversity within plans and strategies and new objectives to be achieved until 2030.

Lastly, Palmar underlined, should the world does not take serious actions by 2020 to protect the environment and conserve the natural resources, it will affect healthy, economical and social living of humans, she mentioned we are in a race against time to control the accelerated degradation of the natural recourses as we seek positively for the biodiversity integration in policies, and developmental sectors of the countries.