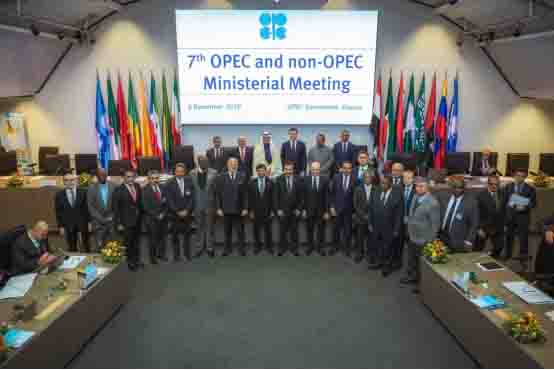 The 7th OPEC and non-OPEC Ministerial Meeting was held in Vienna, Austria, on Friday, 06 December 2019, under the Co-Chairmanship of OPEC’s Conference President, HE Manuel Salvador Quevedo Fernandez, People’s Minister of Petroleum of the Bolivarian Republic of Venezuela, and HE Alexander Novak, Minister of Energy of the Russian Federation.

The Meeting recalled the rights of peoples and nations to permanent sovereignty over their natural wealth and resources. Recalling the ‘Declaration of Cooperation’ (DoC) reached on 10 December 2016, between

OPEC and non-OPEC producing countries. Reaffirming the continued commitment of the participating producing countries in the DoC to a stable market, the mutual interest of producing nations, the efficient, economic and secure supply to consumers, and a fair return on invested capital. Following deliberations on the immediate oil market prospects and the outlook for 2020, the potential consequences of these developments on global inventory levels, as well as overall market and industry sentiment, and noting the continued consultative efforts with consuming countries.

The 7th OPEC and non-OPEC Ministerial Meeting, hereby decided for an additional adjustment of 500 tb/d to the adjustment levels as agreed at the 175th Meeting of the OPEC Conference and 5th OPEC and non-OPEC Ministerial Meeting. These would lead to total adjustments of 1.7 mb/d. In addition, several participating countries, mainly Saudi Arabia, will continue their additional voluntary contributions, leading to adjustments of more than 2.1 mb. This additional adjustment would be effective as of 1 January 2020 and is subject to full conformity by every country participating in the DoC.

Participants reaffirmed their continued focus on fundamentals for a stable and balanced oil market, in the interests of producers, consumers, and the global economy. The Meeting emphasized the vital support and commitment of all participating countries in the DoC to build on the success achieved thus far, through each individual country adhering to their voluntary production adjustments and in supporting the Charter of Cooperation between Oil Producing Countries.

In order to observe the fair, timely and equitable implementation of the above, the Joint Ministerial Monitoring Committee was requested to continue to monitor its implementation and report back to the Meeting, supported by the Joint Technical Committee and the OPEC Secretariat. The Meeting thanked the committees and the OPEC Secretariat for the tireless work – including analysis, reports and recommendations – they had undertaken since the 6th OPEC and non-OPEC Ministerial Meeting.

The Meeting took note of the COP-25 meeting currently taking place in Madrid, and highlighted that climate change, environmental protection and sustainable development are major concerns for us all. The 18th Meeting of JMMC will be held during the first week of March 2020 in Vienna, Austria, with an OPEC and non-OPEC Ministerial Meeting on the 6 March 2020. The Meeting decided that an OPEC and non-OPEC Ministerial Meeting also will convene in Vienna, Austria, on 10 June 2020. The Meeting expressed its sincere gratitude to the Government and to the people of the Republic of Austria, as well as the authorities of the City of Vienna, for their warm hospitality and excellent arrangements made for the meeting.