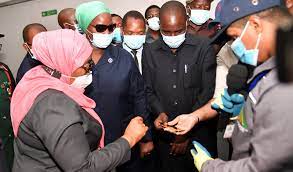 President of the United Republic of Tanzania, Samia Suluhu Hassan has instructed the Bank of Tanzania (BoT) to commence the purchase of refined Gold to boost the country’s reserve of the precious metals.

She noted that the launching of the plant, which cost 12.2bn/- and with the daily capacity of processing 480 kilograms of minerals, paved the way for BoT to start buying the refined Gold as required by the law, and directed the central bank to do it with immediate effect.

Tanzania is among the world countries with highest gold reserves, with data showing that it boasts 45 million ounces. Mining makes up more than 50% of the country’s total exports, of which a large part comes from gold.

“The country will benefit a lot from the gold refinery plants, some of the gains include the increase of gold reserves at the BoT and increase in national revenue through loyalties,” she stated.

Gold reserves have always been an important part of the diversification of global reserves for countries. It is an important asset of foreign exchange reserves.

The new plant will be capable of purifying gold by 99.99 per cent and refining 480kg per day.

“This is an excellent and ultra-modern refinery, its purity is of high quality, its building will beautify Mwanza city which is in tandem with the government’s quest to turn Mwanza a business hub in the Great Lakes region,” said President Samia.

The factory was built by the State Mining Corporation (Stamico) in partnership with Dubai’s Lozera Company and the ACME Consultant Engineers Pte Limited, Singapore.

On its operation, the MPMR facility is expected to create a total of 120 direct employment and some 400 other indirect jobs for Tanzanians, as well as valuation of other minerals, apart from gold.

It is among three first ever gold refineries to be built in the country, with the other two found in Geita and Dodoma regions.

To ensure the sustainability of raw materials for the refinery factories, President Samia said the government would come up with strategies that will empower small scale miners to increase their capacity to collect enough raw gold.

“My concern is the availability of raw materials. As the government, we have a lot of work to do to enable miners to dig more so that more raw materials are made available,” said the president.

She also commended the MPMR investors for setting aside a budget of 346.5bn/- for buying raw gold to be refined, asking the small-scale miners in the lake zone regions to make better use of the opportunity for individual and national gains.

“The plant will not only stimulate economic activities in Mwanza region but also create intense competition with other regions, out of the 346.5bn/- that has been set aside by investors to buy all the gold that will be mined,” she said.

According to the Head of State, effective supervision of the sector would enable the government to realize the target of increasing the contribution of the mineral industry to the Gross Domestic Product (GDP) to 10 per cent, by the year 2025.

Currently, the contribution of the mineral sector to the GDP stands at 6.7 per cent up from 5.2 per cent of the financial year 2019/2020.