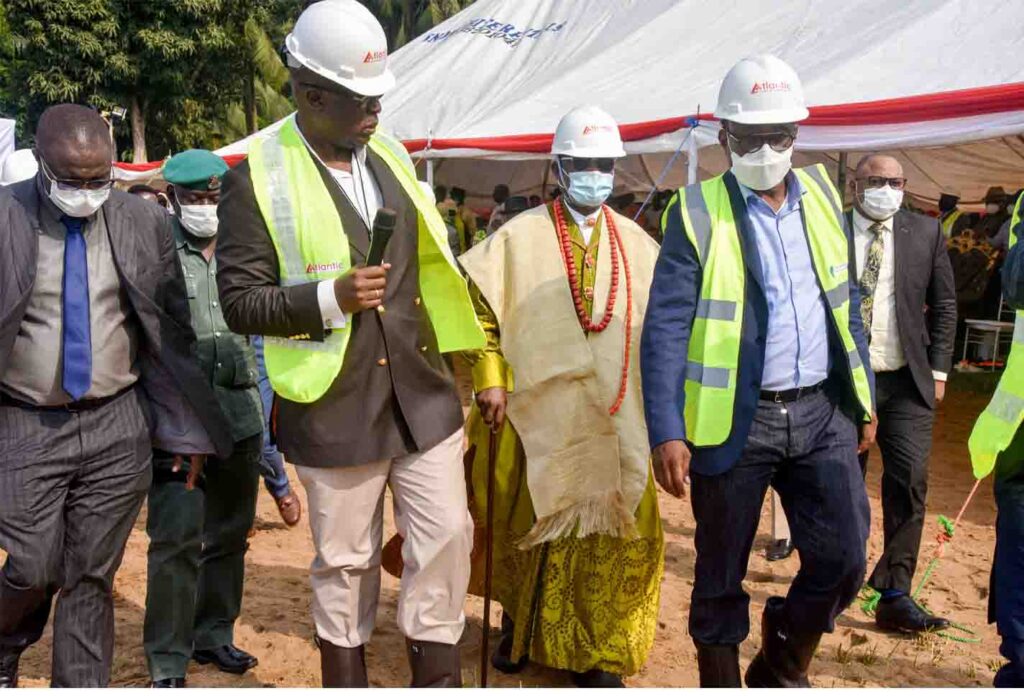 The Minister of State for Petroleum Resources, Chief Timipre Sylva on Saturday performed the groundbreaking ceremony of an Energy Infrastructure Park being developed by Atlantic International Refinery and Petrochemical Limited in partnership with the Nigerian Content Development and Monitoring Board (NCDMB) at Okpoama, Brass Local Government Area, Bayelsa State.

Speaking at the event, the Minister hinted that one of the best strategies to curb restiveness in the Niger Delta region is to create jobs and opportunities for youths. He added that part of his mandate is to collaborate with players in the private sector to establish oil and gas facilities, including modular refineries, which would ensure value addition to the crude oil, products sufficiency, create jobs in-country and curb pipeline vandalism.

He charged the people of Okpoama Kingdom and other parts of the Niger Delta to create an investment friendly environment that would attract other oil and gas and manufacturing facilities to the region.

The Executive Secretary of NCDMB, Engr. Simbi Kesiye Wabote in his remarks, listed the various elements of the Energy Park project to include a 2000 barrels per day modular refinery, power plant, and jetty. He added that the project will serve as catalysts for infrastructural development and spur of economic activities in Bayelsa State.

He explained that the Board decided to partner with Atlantic International Refinery and Petrochemical Ltd to develop the Energy Park in line with its mandate of catalyzing oil and gas activities.

He confirmed that the Atlantic modular refinery is the fourth in the series of the Board’s partnerships to contribute to the implementation of the Modular Refinery aspect of the Federal Government’s Refining Roadmap.

According to the Executive Secretary, “with the recent commissioning of the Waltersmith Refinery, we have proven that the concept is doable with the right dedication and partnership models. Our focus now is to ensure the completion of the remaining three modular refineries under construction”.

Acknowledging that the location of the Atlantic Modular refinery was challenging, the Executive Secretary said “we believe that with the capability of our partner, and especially the support of our stakeholders in the Community, the State, and the nation at large, we will come back next year to commission the project”.

He added that the park will not only transform the economic activity in Brass but will also act as a commercial hub for logistics in Niger Delta, unlocking significant developmental in Brass community and its environs.

He thanked His Royal Majesty, the Amanyanabo of Okpoama Kingdom, King Ebitimi E. Banigo (OFR) for his royal blessings and hosting the project in his Kingdom. He also thanked the Honourable Minister of State for Petroleum Resources and the Executive Secretary, NCDMB, for their unwavering support towards the actualization of the project.

NNPC records a total of N1.95tn from white products sale