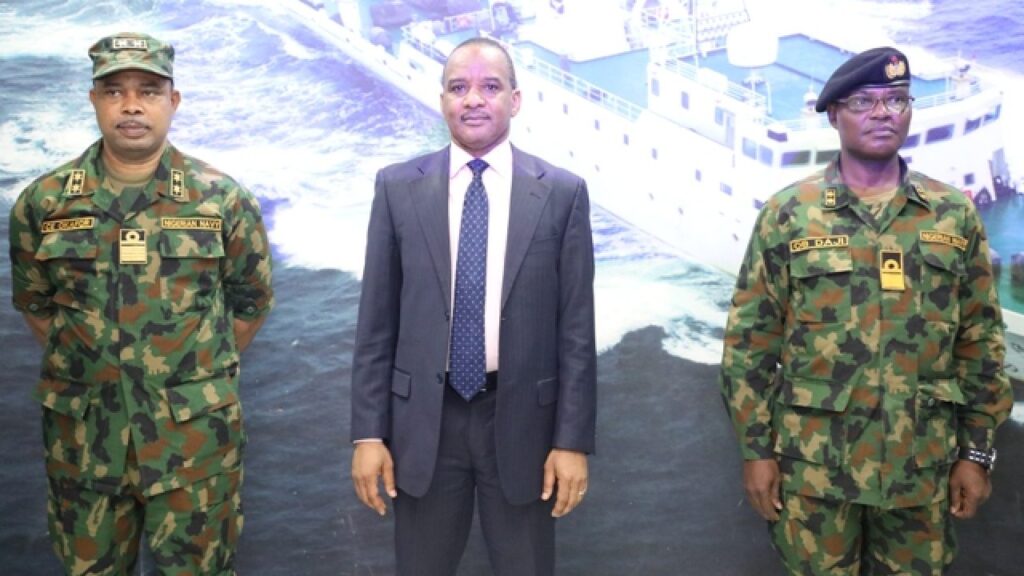 Ship owners and Master Mariners have praised the Nigerian Maritime Administration and Safety Agency (NIMASA), and the Nigerian Navy

for securing the Lagos anchorage area and ensuring that there has been no pirate attack after the cancelation of the OMSL Contract by the Federal Government about two months ago.

The contract, in which OMSL, in partnership with the

Nigerian Navy had been providing security services to foreign ships calling at the Apapa and Tin Can Island Ports in Lagos at $2,000 per day at a designated area referred to as the Secured Anchorage Area.

The Director General of NIMASA, Dr Bashir Jamoh, at a recent meeting with the Shipping Association of Nigeria, had assured that the agency was intensifying efforts to protect, interdict, and deter threats around vessels anchored in the SAA.

According to Jamoh, the new security effort was encapsulated in the total deployment of assets under the Integrated National Security and Waterways Protection Infrastructure, also called the Deep Blue Project. The deployment is on-going with the primary aim of providing security in Nigerian waters and the Gulf of Guinea and tackling the security challenges encumbering the shipping business in the area.

“We are deploying high-tech assets under the Deep Blue Project to not only deal with piracy and armed robbery in our territorial waters frontally, but also respond to the increasing sophistication of these maritime crimes.

“The Nigerian Navy and NIMASA are partnering to ensure a high level of security in our waters. We are tying up all loose ends and very soon everything would become manifest and clear to stakeholders and operators,” Jamoh stated.

The immediate past President of Nigeria Indigenous Ship Owners Mr. Aminu Umar noted that since the OMSL cancellation, there has been no increase in attacks on ships in the Lagos anchorage, he however called for robust security in the entire Gulf of Guinea.

“Remember that the directive is that NIMASA should secure the entire Lagos anchorage, so I think NIMASA is doing that, I understand they are deploying some assets that will add to the Nigeria Navy, so far the threat or attack on vessel at Lagos anchorage, I don’t think we have witnessed any and we thank God for that and we are grateful for whatever NIMASA and Navy are doing there.”

“However, in the entire Gulf of Guinea, south of Lagos, the threat has not reduced and the situation is still on and we witnessed an attack just recently and this is something that is not good to hear, and we want to see the Navy and NIMASA handle that area as well” he said.

Speaking also, the President National Association of Master Mariners (NAMM), Capt Tajudeen Alao, also commended the effort of NIMASA and the Nigerian Navy in securing the Lagos anchorage, while also demanding that the security should extend to the entire Nigerian waters.

“I commend the courage of those who fought for the stoppage of that illegal set up, so when you have such a thing being removed, normally there would be issues of some attacks to show that they need to be there, but in the last two months everything is quiet.

So, our bone of contention now is to make the water safe, not just a fee-paying for specially carved area, we should demand from the government to make the whole of our waters safe” he said.

Women Have Been Central to Our Operations, Success Stories in NNPC — Kyari