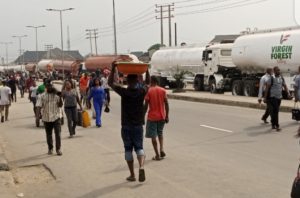 By Mordi Chukwunonso Esther
A stakeholder and former Deputy Speaker of the House of representatives, Chibudom Nwuche, has urged Youths in Rivers State to protect oil and gas facilities located in their various communities from vandalism.

Nwuche gave the charged in Port Harcourt while receiving members of Ekpeye Youth Congress. He  also charged the youths to protect Government and public infrastructure and project sited in their Communities.

He tasked the youths to support Governor Nyesom Wike in his continued efforts to rebuild urban infrastructure and bring development to all local government areas in the state.

Responding, President of Ekpeye Youth Congress, Bright Itenye, commended the former Deputy Speaker of the House of Representatives, for his commitment to peace and development in Ekpeyeland.

The youth group president described Nwuche as a statesman and a leader of Ekpeyeland, particularly in his support to traditional institutions, youths and women in Ekpeyeland.