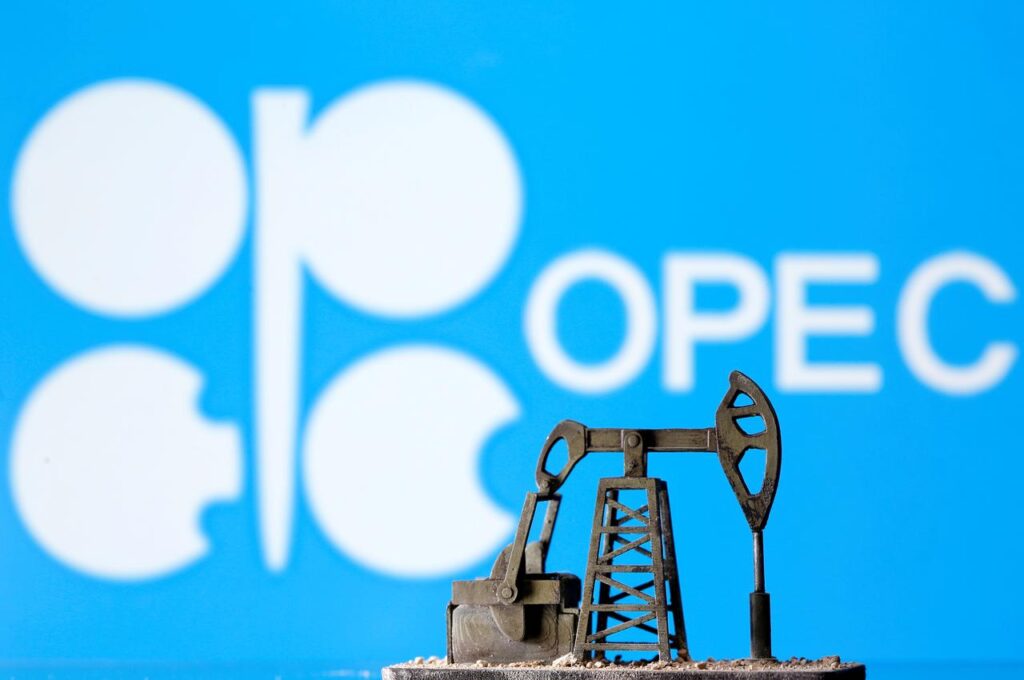 After reviving crude prices from an unprecedented collapse over the
spring, OPEC+ is seeing the recovery stall and fuel demand falter as the
deadly pandemic surges once again. Prices slipped below $40 a barrel
last week for the first time since June.
On Thursday, Saudi Arabia and Russia, the leading members of the
alliance, will chair a monitoring meeting to assess whether the vast
production cuts, which they started easing in August, are still staving off
an oil glut. New signs of exporters reneging on the deal are not helping.

Oil Prices are Down Sharply So Far this Month
“There were some major assumptions built in on where demand and the
recovery would be now, and it just hasn’t happened,” said Mohammad
Darwazah, an analyst at research firm Medley Global Advisors LLC. “If
I’m OPEC and if I’m Saudi Arabia, I would be concerned.”
The relapse is a source of acute financial distress for OPEC nations,
from poorer members like Nigeria and Venezuela who need crude prices
far above current levels to cover government spending, all the way up to
wealthy Gulf monarchies like Kuwait.
Riyadh and Moscow had anticipated that a resumption in global
economic activity, combined with the supply curbs, would sharply
deplete the hoard of surplus oil inventory accumulated during
lockdowns. But there are growing signs the market is not tightening so
fast.
The peak holiday driving season has passed in the U.S., yet rush-hour
traffic is still sparse and crude inventories stubbornly high. In India, the
third-biggest consumer, transport-fuel sales remained 20% below year-
ago levels last month. Buying has slowed even in China, where refiners
binged on crude at the height of the crisis.

Trading houses are hiring oil tankers on long-term contracts once again
to store surplus barrels.
According to the Head of Commodity Strategy at RBC Capital Markets
LLC, Helima Croft, the downturn is not yet severe enough for OPEC+ to
re-impose the full output cutbacks made in the second quarter.
“After tapering the cuts last month from 9.7 million barrels a day to 7.7
million, a sense of inertia means there will be a “high bar” for any new
action.
“For the men who reside in the palaces and the presidential halls, there
is a price at which they make a panicked phone call,” said Croft. “The
question is; what is the price?” she said.
In theory, OPEC’s task should get easier next quarter as demand for
winter fuels kicks in and a gradually mending global economy rekindles
the need for road and aviation fuels, data from the International Energy
Agency (IEA) in Paris shows.

Strong Statement
But as the outlook continues to darken, the Saudis may choose to
underscore their readiness to act.
“We expect a strong statement that if markets continue to weaken, the
producer group will be prepared to trim output further,” said Ed Morse,
Head of Commodities Research at Citigroup Inc.
In the meantime, the kingdom will press on with its mission to enforce
rigorous implementation of the curbs.
Saudi Energy Minister Prince Abdulaziz bin Salman has achieved an
unusual degree of success in this area, bringing habitual quota-violators
like Iraq and Nigeria to heel by assigning them “compensation cuts” to
make up for defaulting earlier.
The two countries have so far implemented only a fraction of those extra
curbs, and Baghdad is expected to seek more time to deliver the rest.

Nonetheless, the punishment itself has apparently spurred them to
previously unseen levels of compliance with the original quotas.
Just as they toe the line, Riyadh is encountering a new challenge from
an unexpected quarter. The United Arab Emirates, traditionally a
staunch ally, has admitted to flouting its limits by roughly 20%, while
promising to correct the error. Export data from consultants like Petro-
Logistics SA and Kpler SAS indicate the UAE’s transgression could be
many times bigger.
The Saudis will likely try to discreetly address the misbehaviour of their
Gulf partner, which for now appears a minor blemish in an otherwise
well-executed strategy, said RBC’s Croft. The bigger issue is whether
OPEC+ responds promptly enough if the deterioration in oil demand
continues.
“Judged on compliance, I think they could take a victory lap,” she said.
“The real challenge is , is the organization nimble enough? If this really
does stall out, how fast can they react?”

“The Oil and Gas Sector Remains One of The Least Gender-Diverse, With Sparse Female Representation in Technical and Field Roles” -Funmi Ogbue, President/ Co-Founder WIEN