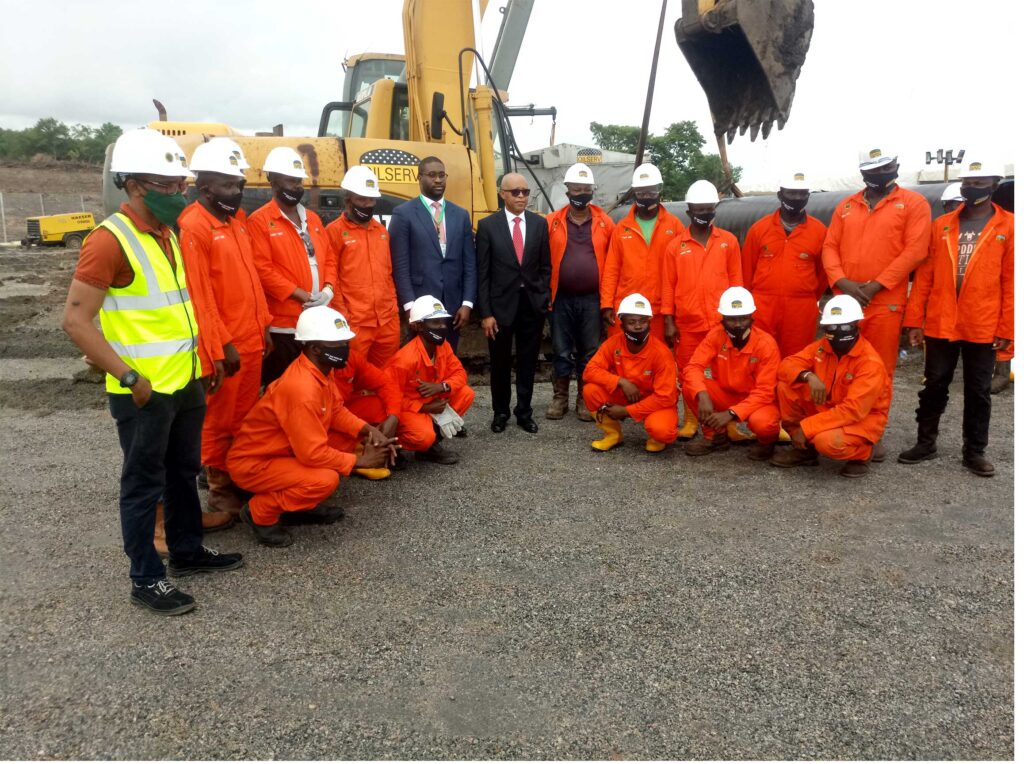 One of the biggest pipeline projects to be executed in Nigeria is the Obiafu/Obrikom to Oben Node Gas Transmission Pipeline System which forms part of the Nigerian Gas Master Plan. Following on its heels is the recently launched Ajeokuta-Kaduna-Kano (AKK) gas pipeline project. Both projects are being executed by the same contractor, Oilserv Limited, an indigenous integrated engineering, procurement, construction, installation & commissioning (EPCIC) service provider.

With the AKK project, Oilserv is announcing that the era of looking inwards for solutions to Nigeria’s infrastructural development, especially in the oil and gas sector, has kicked off in earnest.

Speaking to media executives in Ajeokuta, the start-off point for the AKK gas pipeline project, Chairman/Group Chief Executive Officer, Oilserv Limited, Engr. Emeka Okwuosa noted that the federal government has started a local content policy that will give both credence and opportunity to indigenous companies to showcase their prowess in all areas of development and innovation in the country.

He insisted that Nigeria has abundant skilled manpower in all sectors of the economy, sufficient to drive the country, and commended President Buhari for tapping into this resource.

“This is a major part of our story, but also, this will go a long way to show that indigenous capacity has grown. Oilserv started its build-up even before the Local Content law came into place a few years ago. And we have continued to build and encourage and develop a lot of capacity. So, for us, it goes to show clearly that we have a Nigerian company that can compete anywhere in the world, and develop. This is one of the largest pipelines that exist in the world.”

Affirming the company’s competence, the Group Managing Director of the Nigerian National Petroleum Corporation (NNPC), Mallam Mele Kolo Kyari, while flagging off the project had assured the President: “We are confident that the contractors will deliver on this project. We have put every structure of transparency in management to ensure that this project is delivered as planned. This is a landmark project.”

It will be recalled that the first phase of the Nigerian Gas Masterplan, the Obiafu/Obrikom to Oben (OB3) Node Gas Transmission Pipeline System was built by Oilserv. Before then, Oilserv had developed the entire gas distribution network in Lagos, powering industries in the state. Oilserv has also built major gas pipelines across South-South gas pipeline, 128 km, from the western end of Akwa-Ibom to Mfamosing, very close to Cameroon, that has made it possible for UNICEM cement plant to be able to operate.

The AKK pipeline is a 614km-long natural gas pipeline set to be laid between Ajaokuta and Kano in Nigeria and forms the first Phase of the Trans-Nigeria Gas Pipeline (TNGP) project. The TNGP project is an integral part of the proposed 4,401km-long Trans-Saharan Gas Pipeline (TSGP) to export natural gas to countries in Europe.

The AKK pipeline is slated to originate from Ajaokuta and pass through Abuja and Kaduna, before ending at a terminal gas station in Kano. The project among other benefits will curb gas flaring and further boost industrialization and development in all regions in Nigeria.

The choice of Oilserv Limited seems to be deserving as the company has performed various key projects relating to platforms, production facilities, and installation of Bulklines, all of which involve engineering, project management and construction services.

The company’s antecedent includes being the first and only Nigerian indigenous company to fabricate, install and commission the largest Oil manifold station for Shell Petroleum Development Co. Ltd. (S.P.D.C.), while also having successfully designed and constructed the largest Gas Transmission Pipeline System in Nigeria and Africa – the Obiafu/Obrikom to Oben Node Gas Transmission Pipeline System, which forms a part of the Nigerian Gas Master Plan.

Among other challenging projects, Oilserv is also a major company executing pipeline repairs and rehabilitation work for S.P.D.C and the Nigeria Liquefied Natural Gas Limited (NLNG), in the Niger Delta region of Nigeria.