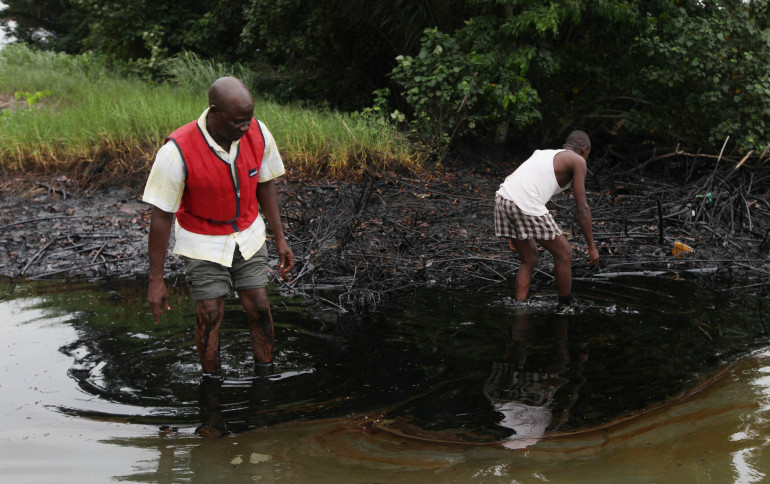 A Dutch appeal court in The Hague, Netherlands  has ruled that the Royal Dutch Shell, a British-Dutch oil company, and its Nigerian arm, the Shell Petroleum Development Company of Nigeria Limited, pay for damages caused by oil spills in the Niger Delta.

Four Nigerian farmers, together with friends of the Earth Netherlands (Milieudefensie)-am environmental group, had sued Shell  in 2008 for oil spills in their villages Goi, Oruma and Ikot Ada Udo In Bayelsa and Rivers state respectively. They said that the oil spill caused widespread pollution of the land.

The farmers, which include Princewill Alali Efanga, Chief Eric Barizaa Dooh, Elder Friday Alfred Akpan, and Chief Felix Oguru, had urged the Court to order Royal Dutch Shell to mandate its subsidiary, SPDC, to remediate and recover the environment, that was destroyed by its facilities.

Shell argued in court that the leaks were caused by saboteurs. However, the court ruled that the oil company did not prove beyond reasonable doubts that other parties were responsible for the leaks rather than poor maintenance.

“This makes Shell Nigeria responsible for the damage caused by the leaks” in the villages of Goi and Oruma, the court said.

It also ordered Shell to install leak detection systems on pipelines to avoid environmental pollution in the future.

The amount of compensation would be “determined at a later stage”.

For Elder Friday Akpan in Ikot Ada-Udo community in Akwa Ibom State, the Dutch Court is yet to give judgement , as the Court said it will need to gather more information on the matter. However, a lower court in the Hague had rule in 2012 that Shell should compensate the farmer for his losses.

Reacting to the judgement, the Nigerian Counsel to the four farmers, Barr. China Williams, said the Court has set a new standard that will give hope to ordinary citizens that no matter how powerful a company is, there will always be a day of reckoning.

Williams, who is also the Acting Executive Director, Environmental Rights Action and Friends of the Earth Nigeria, described the judgement as historic.

He said the judgement is unique because it is the first time a Dutch company has been held liable together with its foreign subsidiary for the breach of its duty of care abroad.

“Today is a historic day for communities in the Niger Delta. Shell has been held accountable for destroying the Niger Delta environment. The journey started way back 2008 and today, we are having a judgement from the Court of Appeal in the Hague, Netherlands.

“Recall that in 2018, the lower court uphled our claims that the Royal Dutch Shell can be held accountable for the actions of their subsidiary companies abroad.

“With today’s judgement, a global standard has been set.”

The Four Nigerian farmers  expressed excitement over the judgement delivered by the Appeal Court. Speaking with newsmen in Port Harcourt, the three elated farmers described the judgement as a world-class precedent against oil multinationals, hence should be a lesson for other companies operating in the Niger Delta.

Reacting to the judgement, Shell said it was “disappointed” adding that it continues to “believe that the spills in Oruma and Goi were the result of sabotage”.