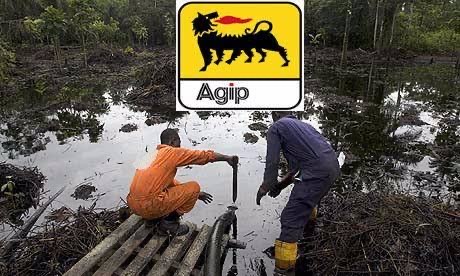 Angry Indigenes of Okpoama Kingdom in Brass Local Government Area of Bayelsa State, have threatened to occupy and shut down the crude oil production facilities owned by Nigerian Agip Oil Company (NAOC) over massive oil leakages from its pipeline that polluted their river.

According to the Indigenes, though they have witnessed frequent occurrence of oil leakage along its 50 years old Ogoda-Brass crude oil pipeline, the recent incident of oil spillage along the same axis of the pipeline at Amanga-Etima, near Ewoama in Okpoama on the 28th of October, 2020 is the third in the last six months

Confirming the development, an Indigene of Okpoama community and Former Chairman of the Nigerian Union of Journalists (NUJ) in Bayelsa, Comrade Tari Akono, said the Italian oil giant, the Nigeria Agip Oil Company (NAOC) has derailed the occupation of the people of Okpoama Kingdom in Brass Council Area of Bayelsa State, through frequent occurrence of oil leakage along its 50 years old Ogoda-Brass crude oil pipeline.

Akono, who said the recent spillage is the 3rd spillage in 6 months in the same axis of the pipeline at Amanga-Etima, near Ewoama in Okpoama Kingdom, noted the entire ecosystem have been devastated, thereby creating hardship for the fishermen and those who survive through it since fishing and farming are the main occupation of the people.

”The current pollution is the 3rd leakage in 6 months and Agip has been crafty in its approach to resolving the leakages. Unfortunately, we have a Minister for State for Petroleum, Chief Timipre Sylva whose body language doesn’t suggest any form of concern for what the company is doing to his people.”