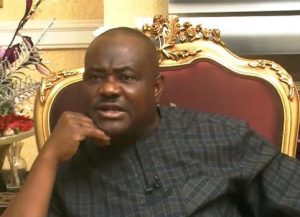 The governor particularly blamed the Shell Petroleum Development Company of Nigeria, SPDC of diving communities and refusing to implement the memorandum of understanding signed with host communities.

Governor Wike made this known during a Courtesy Visit by the Ambassador of France to Nigeria, Mr. Jerome Pasquier, at the Government House Port Harcourt.

Wike stated that in line with his commitment to improving security across the state, Rivers State Government will henceforth sanction any company that awards surveillance jobs to cultists.

He said that before such surveillance jobs are awarded, the companies should inform the State Government for proper scrutiny of the beneficiaries.

“When you empower them, they have more money to acquire arms. Any company that gives surveillance jobs to cultists will be sanctioned.

“Shell is part of the major culprits. Shell divides communities to make sure that the people don’t work together. Shell doesn’t want to implement the memorandum of understanding signed with communities.

“I sat in a meeting with Shell, Agip, and Total. It was only Shell that refused to implement the Memorandum of Understanding. Despite the actions of Shell, we shall continue to protect national assets”, he said.

The governor also appealed to the French Ambassador to take steps to ensure that Air France returns to Port Harcourt. He said the state government is prepared to support the airline through relevant policies.

Wike urged the management of Air France to reconsider their action and return to Port Harcourt, adding that his Administration will continue to work towards enhancing a fruitful relationship with the French Government.

Earlier, France Ambassador to Nigeria, Mr. Jerome Pasquier, noted that there is a major French Presence in Rivers State through the operations of Total Exploration and Production Nigeria, TEPNG, and other professionals.

Pasquier stated that the embassy will continue to work towards greater French Presence in the State, adding that the Embassy is working to persuade more French investors to come to Nigeria, especially Rivers State.

Nigeria’s DPR says 53 oil blocks open, yet to be awarded