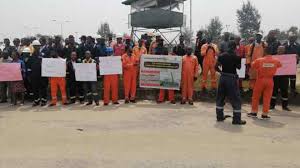 Over 1,650 workers of the National Engineering and Technical Company, a major contractor to ExxonMobil, on Sunday besieged the oil company’s premises over alleged non-payment of their entitlements.

The protesting workers’s spokesperson Mr Udeme Bassey told newsmen in Ibeno LGA that they would not leave the premises until their demands were met.

“We will stay here as long as they delayed to pay us our entitlements. It is ExxonMobil that permits people to come inside its facility and the company supervises the work but when it comes to payments of our entitlements, the company will pay deaf hears,” Bassey said.

He explained that ExxonMobil awarded contract to NETCO to upgrade cables at the Qua Iboe Terminal adding, that they had worked under the supervision of the multinational oil company for the past four years.

He disclosed that two of their members died in the course of their duties because their work was close to gas flaring site.

“We are working at the flaring site with severe heat which is against safety rules; ExxonMobil will preach this safety but they don’t adhere to it,” Bassey alleged.

According to him several attempts to meet with the management of the multinational oil company and the ministries of Environment and Petroleum Resources ended in deadlock.