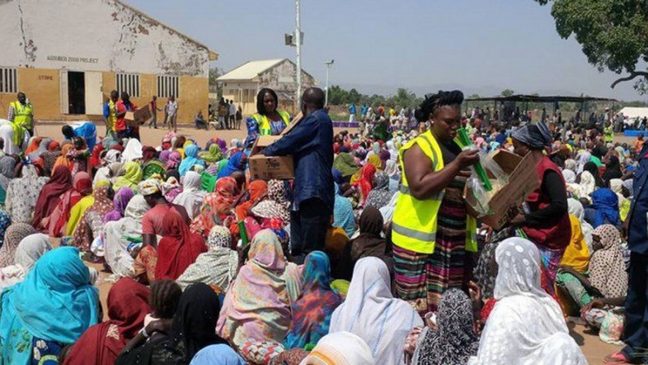 Abdulkadir said the items which comprise food and non-food items would be distributed to 1,500 households accommodating 8,000 IDPs in 10 selected Local Government Areas of the state.
He listed the areas as Konduga, Bama, Damboa, Gwoza, Guzamala, Monguno, Marte, Nganzai, Ngala and Kukawa.
Abdulkadir said 25kg of rice; 50kg of Maize; 50kg of millet; 25kg of soya beans; 5 litres each of vegetable oil and palm oil as well as salt would be given to each household.
“They will also receive non-food items, including wrapper, blanket, mattresses, mats, towel, mosquito net, bucket, plastic tray, cups, kettles, set of aluminium pots, toothpaste, sanitary pads and pampers.
“The distribution will be carried out by Dangaru Global Resource Nigeria Ltd., in partnership with the State Emergency Management Agency,’’ he said.
The NNPC official said the gesture was part of the corporate social responsibility of NNPC and Shell to persons displaced by the Boko Haram insurgency.
Responding, the deputy governor commended the organisations for the initiative which he noted would alleviate the suffering of IDPs.
Kadafur called on other organisations and well meaning Nigerians to support the state government toward restoring lasting peace to the North East region.