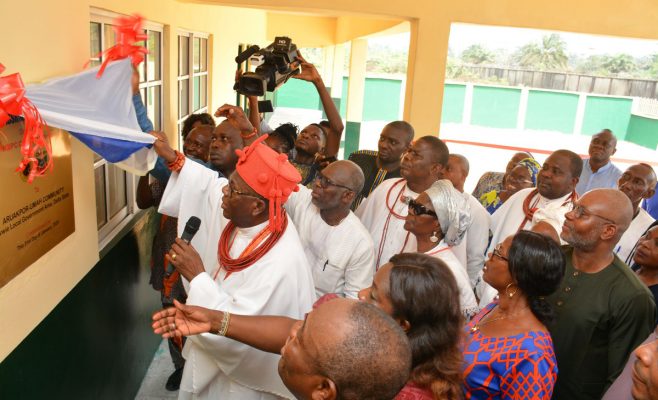 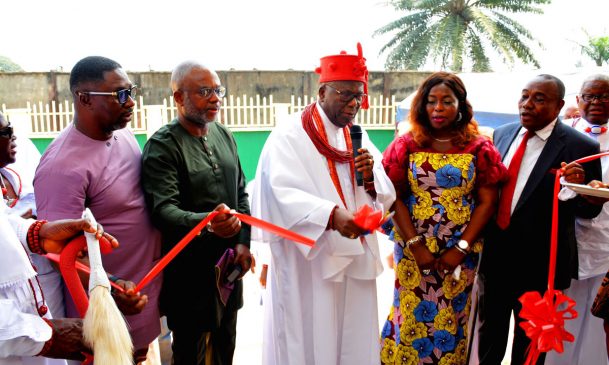 There was palpable excitement in Aruakpor-Umah Community, in Uvwie Local Government Area of Delta State, on Friday, January 31, 2020 as the NNPC/Chevron Joint Venture, in collaboration with the Delta State Government, commissioned a six-classroom block for the use of  pupils of Abe 1 primary school in the community.

The six-classroom block, with eight (8) toilets and a teachers’ office, was funded by the NNPC/Chevron Nigeria Limited Joint Venture (NNPC/CNL JV) and executed under a Project Specific Agreement (PSA) basis by the Aruakpor-Umah community.

The community awarded the contract to one of its own, Pyrammidt Company Nigeria Ltd in December 2017.

CNL’s General Manager, Policy, Government and Public Affairs (PGPA), Esimaje Brikinn, during his address, said the project was one of the Social Investments made by the NNPC/CNL JV’s to improve the welfare of the people in its areas of operations and beyond.

He thanked the Delta State government for approving managing and creating the enabling atmosphere for the successful execution of the project.

He also commended the Aruakpor-Umah community for good project execution.

Brikinn, who was represented by the Area Manager, PGPA Field Operations, Mr Sam Daibo, stated that “Through partnership with the government of Delta State as well as community stakeholders, we have been adding significant values to people’s lives through our Corporate Responsibility and Community Engagement initiatives.”

“This is the trail of goodness we leave behind in every community where we operate,” he said.

The  Delta State Commissioner for Basic and Secondary education, Chief Patrick Ukah, who was represented by the Chief Inspector of Education, Uvwie LGA, Mrs. Jane Awoyinka appreciated the NNPC/CNL JV’s commitments to its Social Responsibility by giving back to communities around its operational areas.

“I am aware of several similar projects in the area of educational support by the NNPC/CNL Joint Venture and I commend the Company for not relenting on its efforts to execute its Social Responsibility programmes.”

The Ovie, thanked the NNPC/CNL JV for  the laudable achievement adding that he was impressed by the speed of execution.

He urged other citizens and corporate organisations to emulate the sponsors in improving educational and other  infrastructural development in host communities.

He went down memory lane to the time when the school, which was named after him, was started and informed all present that the first five pupils, who were foundational members of the school,  were on his palace  scholarship till the conclusion of their education.

The Chairman Aruakpor-Umah community, Prince Emmannuel Enewe  as well as the Onewhoro of the same community all commended the JV for providing the funds to build the school.

They both promised that the school facility would be well maintained by the community.

The Teachers of Abe 1, primary school were very excited and looked forward to teaching and making use of the new facility.

The obviously elated pupils of Abe 1, primary school entertained the gathering with several traditional dances while one of them, Omasan Ofenor gave a vote of thanks on behalf of the Staff and pupils of the school.

“The project will create a more conducive environment for teaching and learning for Teachers and pupils of Abe 1, primary school,” she said.

Other projects sponsored by the NNPC/CNL JV for communities around CNL’s Warri Office include: the Ekpan Women Development Center; E. Library at Ubeji; Mother & Child Hospital in Sapele; the Aruakpor-Umah Road Electricity project;  the Edjeba Solar Powered Water project and the Osubi Solar powered water project which have been commissioned.

The Joint Venture has also made good progress on the Ekpan Surgical Theatre/Call Rooms. In addition, there is an NYSC Science Teacher’s program at Ekpan Secondary School, Effurun.

Train 7 will Set the Record in Nigerian Content Capacity…