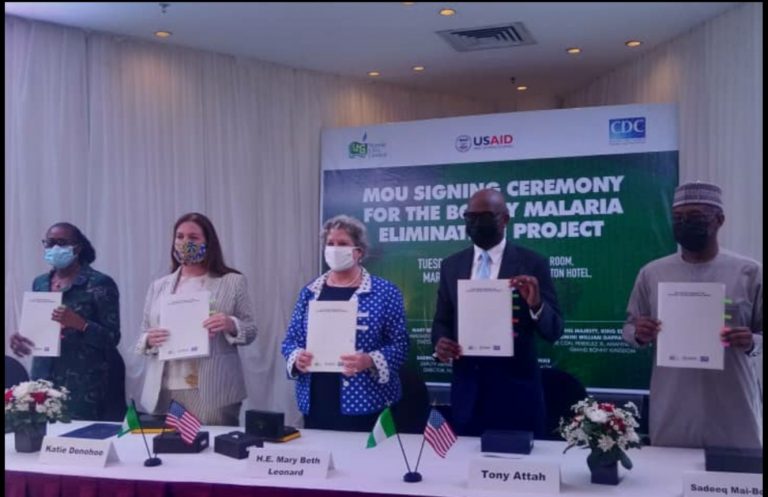 The MoU was signed by Tony Attah, NLNG’s managing director, on behalf of NLNG and the United States Ambassador to Nigeria, Mary Beth Leonard.

The U.S. President’s Malaria Initiative (PMI) is focused on reducing malaria-related mortality by 50 percent across 24 high-burden developing countries in sub-Saharan Africa, including Nigeria and three Southeast Asian countries, through a rapid scale-up of four proven and highly effective malaria prevention and treatment measures.

The MoU also includes a partnership between NLNG and the U.S. Center for Disease Control and Prevention (CDC) through the U.S. President’s Emergency Plan for AIDS Relief (PEPFAR) regarding support to the HIV/AIDS Surge Project, which focusses on the control of Human Immunodeficiency Virus (HIV) on Bonny Island. The HIV/AIDS Surge Project is currently coordinated by Institute of Human Virology Nigeria (IHVN) in Rivers State.

In his remarks during the signing ceremony, Attah stated that NLNG commenced the Bonny Malaria Elimination Project, BNYMEP, in January 2019 as part of its vision to transform Bonny Island into a tourism and economic hub in the West African region. He further stated that a malaria-free zone was key to attracting investments to the Island, which will positively impact the socio-economic well-being of its residents.

“We are ready to put Bonny Island on the map as one the first malaria-free community in Nigeria and a reference point in the global eradication of the disease. Malaria has impacted negatively on health care in Nigeria, and it is time to change the narrative.  It is time to free ourselves of the economic burden that this scourge has imposed on us for years, freeing available resources to tackle other issues and to attain more Sustainable Developmental Goals (SDGs). We hope to set a precedence with a workable model for private sector participation in SDGs’ achievement. These goals align with our vision of helping to build a better Nigeria,” Attah said.

“Reducing the burden of malaria and HIV/AIDS on Bonny Island are goals now within our reach,” the United States Ambassador to Nigeria, Ambassador Mary Beth Leonard said at the ceremony.

She added: “This partnership moves us closer to achieving those goals. I commend the efforts of NLNG to meet its social responsibility in helping the economic climate of Bonny Island by improving the health of its residents.”

Malaria has remained one of the deadliest diseases globally, and Nigeria still records a high number of casualties.

The company has a record of intervention in combating the scourge, with programmes such as Roll Back Malaria Campaign as well as staking $100, 000 in its sponsored Corporate Social Responsibility, CSR, programme, The Nigeria Prize for Science, in search for solutions to the disease.

NLNG, with industry partners, is also sponsoring the Ibani Se Initiative, a health care and awareness programme aimed at reducing the prevalence rate of HIV endemic on Bonny Island.