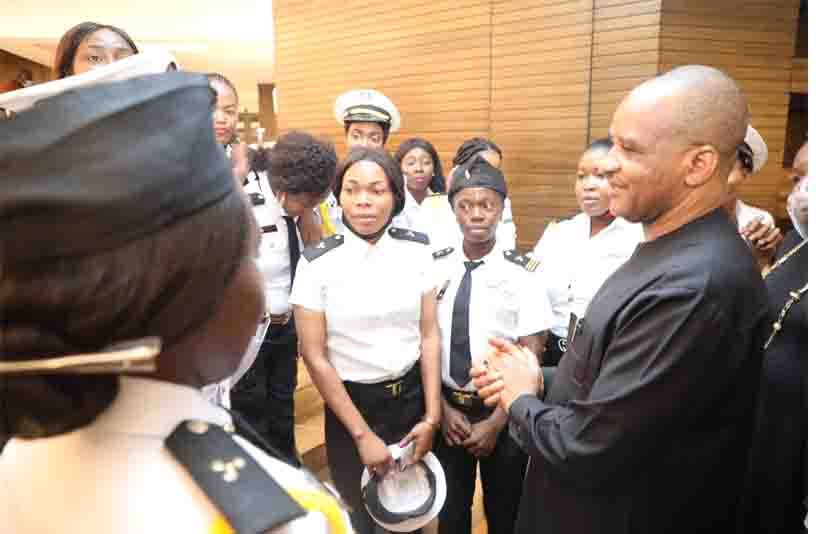 The Director General of the Nigerian Maritime Administration and Safety Agency (NIMASA), Dr Bashir Jamoh has restated the agency’s unflinching support for women in the maritime sector.

Jamoh made this known during a courtesy visit by female cadets of the National Seafarers Development Programme (NSDP),
as part of activities to commemorate the International Women’s Day celebration held on 8 March 2021.

“We are investing in training our female cadets because the future belongs to them. It was such a joy to host these bright & determined young ladies who have chosen a career in maritime. I dream of an all-female Nigerian vessel crew someday,” the Director tweeted on his official twitter account.

Similarly, the DG, in a recent tweet containing a picture of him and other directors of the agency majorly women, said; “In today’s maritime world you have to be up to the task and have the capacity to deliver otherwise you will be shown the way out. So, I have no regret whatsoever and can beat my chest to say that more than 60% of my Directors are women.”

Dr Bashir Jamoh felicitated with women especially in Maritime for their tremendous and matchless resilience in an ever-demanding sector and contributions, he also expressed NIMASA’s solidarity with women worldwide by participating in the “ChoosetoChallenge” campaign of International Women’s Day 2021 which advocates; diversity, equity and inclusion of women in organizations and institutions across the world.

Bridging the inequality deficit between male and female Seafarers in Nigeria and ensuring Seafarers get more sea time experience has been on the front burner of the current Jamoh led administration of NIMASA, hence the admission of more female cadets than ever into the NSDP and an extension of sea time for both cadets and graduate Seafarers.

Overtime, there has been a global clamour for an improved proportion and distribution of women working in the maritime sector. To champion this course, is the International Maritime Organisation (IMO) and the Women’s International Shipping and Trading Association (WISTA) International, who in partnership have launched the Women in Maritime – IMO and WISTA International Survey 2021

IMO on its part, has said, it  is determined to help the industry move forward and support women to achieve a representation in parity with the twenty-first century expectations as evident through the Women in Maritime programme, under the slogan: “Training-Visibility-Recognition.”

“Today, women represent only two percent of the world’s 1.2 million seafarers and 94 percent of female seafarers are working in the cruise industry. Within this historically male dominated industry, IMO has been making a concerted effort to help the industry move forward and support women to achieve a representation that is in keeping with twenty-first century expectations,” IMO stated in a recent publication.