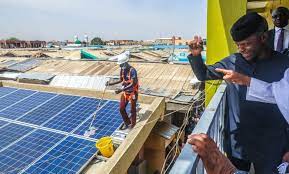 The United Arab Emirate (UAE) has indicated interest to partner with Nigeria in the areas of renewable energy, agriculture, infrastructure logistics, among others.

The partnership includes provision of vaccines to further control the COVID-19 pandemic.

This was made known by the president’s spokesman, Mr Femi Adesina, in a statement recently.

He noted that President Buhari expressed his feelings at a meeting with Minister of State Foreign Affairs of UAE, Sheikh Shakboot Alnahyan, at the sidelines of the Paris Peace Forum in Paris, France.

The Nigerian leader used the opportunity to encourage Nigerians in Diaspora to “subject themselves to the rules and standards of the country in which they live either as working class, or doing businesses.”

He described his countrymen and women as “competitive both at home and abroad,” and urged them to always abide by the rules of their host countries.

“Nigerians are all over the place, very competitive. And the competitiveness starts from home, where they have acquired good education, gone into businesses, and then take all that abroad,” he said.

In his remarks, Alnahyan said his country “thinks very highly “of President Buhari’s leadership, noting that he was striving to “build a better future for generations to come.”

He said there were lots of Nigerians in his country, “who add much value,” assuring that the headwinds of the recent past in the relationship “are now behind us.

“We want to secure, deepen and strengthen the association for the future. We have a lot in common. We may be taking small steps, but they are leading somewhere.”

On proposed investments in Nigeria, Alnahyan said it would be a win-win situation, “which would bring hope and opportunities for people in both countries.

He equally commended the Nigerian government for its robust tackling of violent extremism.