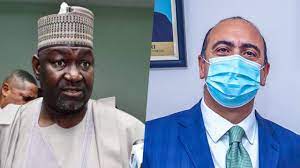 Nigeria’s minister of Power, Mr Abubakar Aliyu, has said the federal government will look at areas where it can collaborate with the government of Egypt to boost the power supply in the country.

Aliyu said this when Mr Ihab Awad, Ambassador of the Arab Republic of Egypt to Nigeria, visited him in Abuja recently.

“I am aware of the meeting you had with my predecessor, which led to a draft Memorandum of Understanding (MoU) that was sent to us from the Ministry of Foreign affairs.

” Which is a very interesting development because as an ambassador to Nigeria you have been here for some time, you are aware how we are facing this issue in this country,” he said.

Aliyu said that the Federal Government would reactivate the collaboration between the two countries and also give a response on when a team from the ministry of power can visit Egypt.

He said that the ministry would discuss and set up a team that will come up with key points and areas the Federal Government can engage with the Government of Egypt.

According to him, the team will also see how a delegation from the ministry can find time to visit Egypt.

“You talked about the discussion which President Muhammadu Buhari had with Egypt President Abdul Fattah al-Sisi, this is very important and that will help us.

“President Muhammadu Buhari is very concerned with the issue of power so will not relent. We will meet to ensure you get some feedback from us, “the minister said.

He said that the collaboration was widely discussed, where special emphasis was placed on the potential and prospects that awaits the two countries to collaborate in the area of power generation.

” We also concluded that an MoU could provide the political, leading framework so that collaboration could be developed.

” On the basis of that, the invitation was extended to your predecessor on leading a high-power delegation from the ministry of power to visit Egypt to discuss and examine the specific areas of collaboration that we addressed during the consultation.

“During my former visit to the ministry, we also came to a common understanding that there was a need for collaboration between your government and our country in the area of revitalising and renewing the power generation.

” Power grid and distribution system drawing point from the discussion that took place between President Muhammadu Buhari and President of Egypt, Abdul Fattah al-Sisi in 2019 during the Nigeria’s President visit to Egypt,”Awad stated.

He noted that the future is on renewable energy adding that during the consultation, the discussion also took place on the potential of sharing experience in the area of solar energy generation.