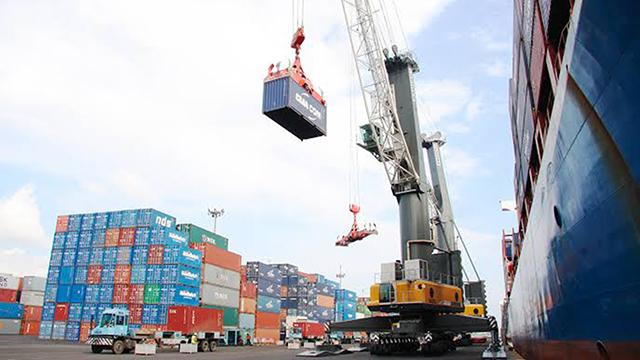 There appears a sigh of relief for importers from the traffic gridlock experienced on the Apapa and Tin Can Island Port roads, as Jakys Nigeria Limited berthed 32,000 Square meters throughout the terminal at Ijegun area of Satellite Town Lagos.

With about 32,000 square meters, the terminal is expected to accommodate over 5,000 containers, and about 25 trucks loading at the same time, thereby easing the Apapa and TinCan Island Port congestion.

The Managing Director and Chief Executive of Jakys Nigeria Limited, Henry Muogho said the terminal is 90% completed and has commenced test running about eight months ago. It has gradually started taking away the pressure from the ever-busy Lagos port roads and bridges aslo.

He explained that the terminal is accessed by barges from any of the port terminals, while trucks come in through the roads to evacuate the containers around Satellite Town, Lagos.

Muogho said the terminal was leased to Mediterranean Shipping Company (MSC Shipping) and its logistics arm; Medlog with a lease agreement of 5 years.

According to him, the terminal is a throughput terminal dedicated for only MSC containers, adding that no third party containers are allowed to come into the terminal.

“Here is going to be like a throughput jetty, no third party containers are allowed to come in here, as you can see, it is only MSC containers that we have here, this means there is also a call-up system for trucks to come in here.

“We have an MoU with the community that made us build the roads, this was part of the lease agreement with MSC and Medlog. Trucks that are coming here would not be parking on the road, therefore, the nuisance value that we have at other ports and terminals, I don’t want to import them here,” he said.

The Managing Director further stated that in order to avoid congestion and confusion, there is need for a call-up system for trucks coming into the terminals.

“We have been carrying out partial operations for eight months now and there have been no complaints from the community. It is not a container depot as such, but a throughput terminal” he said.  T

he Jakys Chief Executive Officer explained that the condition for liaising with Medlog and MSC Shipping was that first,  they must have a truck park, and they already have it for all their trucks coming to pick cargoes at the terminal.

According to him “You cannot see any truck parked on the roads. And in the case of a truck breaking down, two hours were given to them to move the truck.

He described the project as a triple plan withholding bays and truck parks being within the same vicinity, noting also that there is a call-up system from the truck park around Trade Fair Complex along Badagry expressway to the bonded warehouse.

“There is also a call-up system between the jetty and the bonded warehouse. When the terminal becomes fully operational, the traffic volume on our roads would be reduced by not less than 50 per cent.

“While using the bridges as holding bay would no longer be happening as there would be no need for that any longer.

“On the other hand, when other companies do the same thing, the gridlock would be totally eliminated, bridges saved, money spent by Government for road maintenance would reduce, and the suffering Nigerians are subjected to on a daily basis would be eliminated completely,” he said.

While speaking on the access road to the jetty, Sir Henry opened up on the MOU signed with residents of the area.

“The community roads were completely waterlogged which we sand filled. While the state government also came in to certify that what we did is a value-added to the community, by ensuring that the drainage we constructed for the community was in compliance with the state requirements”

“We also did another drainage that runs to several millions of naira, to evacuate all the waters to the lagoon. As of today, we have successfully tackled the problem of flooding in the whole area of where we operate in Liverpool Estate. We are also creating a vibrant economy.”

Also speaking, the contractor in charge of the project, Messers Jasper Structure Integrated Services Limited said construction works have been ongoing for the past eighteen months.

Chief Executive Officer of the company, Mr Jasper Akhigbe said the project was 90% completed and that Nigerian Ports Authority officials have been coming around to inspect.

“We gave the terminal owners a timeline of three months to ensure completion, but when we came in, the scope of work expanded.

By now we ought to have gotten it done, but for some unforeseen challenges.

What we have on ground now, I think we are about 90 percent completed,” he said.