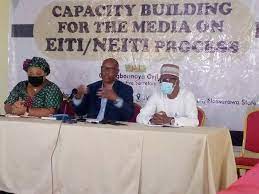 The Nigeria Extractive Industries Transparency Initiative (NEITI) has reiterated the role of the media in ensuring transparency and openness in the extractive industry, especially given the ongoing reforms in the sector.

The Executive Secretary, NEITI, Dr. Ogbonnaya Orji, in his speech at a training organised by the body for editors and correspondents on natural resource governance, which took place in Nasarawa, implored the media to strive to understand the issues bedeviling Nigeria’s extractive industries and to make insightful and investigative reports that will drive reforms in the sector.

“The media must understand the issues, the context surrounding Nigeria’s extractive industries, its peculiarities and global best practices so as to effectively and efficiently carry out the roles of informing, educating and enlightening the public on Nigeria’s extractive sector reforms,” he stated.

Orji called on journalists to uphold the professional reputation of being jack of all trades and master of all, opining that ‘a less informed journalist is an accident waiting to happen’.

The executive secretary urged media professionals to constantly improve and build their capacity in order to engage in their primary task of information and knowledge sharing.

According to him, journalists must lead in steering the country towards the global conversation on energy transition as well as other emerging issues in the EITI, notably beneficial ownership disclosures, contract transparency, commodity trading, gender, environment and project reporting.

“The capacity of the media to understand these emerging issues and their wider implications and application within the context of the ongoing reforms in the extractive sector will be required.

“This will enable Nigeria and NEITI specifically to deepen transparency and accountability as part of the global requirements in business transaction models in the extractive industries”, the executive secretary added.

He further explained that the workshop was put together to expose journalists covering the extractive sector to EITI’s emerging issues and dialogue on what better roles to play in the implementation of the issues.

“These workshops were held in line with my pledge during my inaugural speech that NEITI under my leadership, will work to strengthen engagements with all its stakeholders, including the civil society and the media, through regular consultations, timely dialogues as well as capacity building programmes”, Orji stated.

He reassured the media of NEITI’s commitment to fully implement the requirements as stipulated by the global EITI and appealed that they join the campaign through advocacy, public enlightenment and feedback on EITI implementation across the value chain of Nigeria’s extractive sector.

He noted that his appointment as executive secretary was a show of confidence on the competence of the media to hold leadership positions and contribute to national development.

Orji requested journalists to come up with a framework for the hosting of an annual NEITI media roundtable, noting that such framework will enable constant dialogue, consultations and deepen stakeholders’ engagement on EITI implementation in Nigeria.

Gas Code: DPR to work with Gencos on challenges – Auwalu