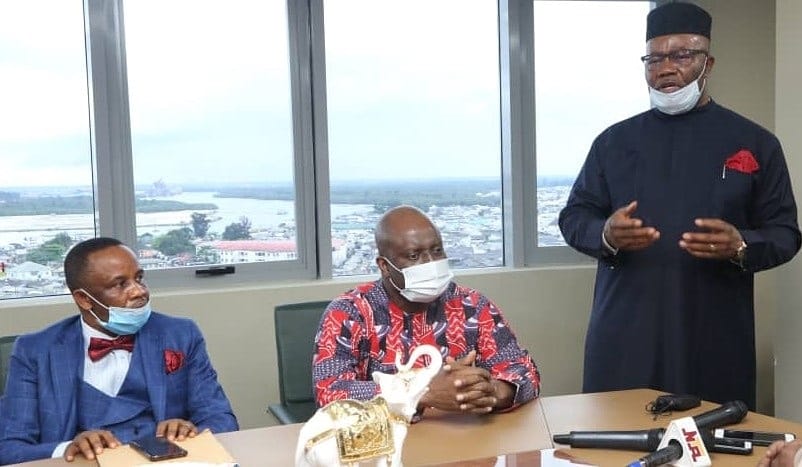 The minister of Niger Delta affairs, Senator Godswill Akpabio, has said the Niger delta regional development master plan and the Niger Delta action plan is to produce one regional road map for development in Nigeria’s oil-rich region and the ministry is committed to harmonizing the plan.Akpabio, who disclosed this at the new Niger delta development commission, NDDC, permanent headquarters at the Eastern by-pass, Port Harcourt, emphasised the need for cooperation and collaboration in the strive to develop the Niger delta region.The minister and his entourage, which included the Permanent secretary of his ministry, Dr Babayo Ardo, inspected the high-rise office complex and remarked that the building tells a positive story for the NDDC.The Minister regretted that the NDDC had not lived up to expectations, noting that ‘’Whether we like it or not, this child (NDDC) has not grown well in 19 years. It could have done better. Perhaps, we lost track of the developmental plan of the Niger delta region’’.Describing the new office complex as ‘’A good story for the NDDC’’, He congratulated the NDDC Acting Managing Director and members of the IMC for doing a good job in delivering the new office complex.‘’The most thrilling thing for me is that change has come to the NDDC. I must commend the management and staff of the NDDC for making this possible. Despite the criticisms and distractions, some positive change has taken place in the Commission and I like to see progress because I am a development-oriented politician’’ he said.  Akpabio said that Professor Pondei should be proud to be the first Chief Executive Officer of the NDDC to move into a new edifice. ‘’The feat could not have been achieved without the cooperation of members of the IMC and the ministry of the Niger delta affairs’’, he said The minister remarked, ’’The completion of the new NDDC headquarters is a positive story for Nigeria, especially when you consider that the project has taken over 24 years to get to this point.‘’It is to the glory of President Buhari that we are sitting in the new headquarters today. This is a legacy project which the IMC will be remembered for’’.Akpabio said that with the inauguration of the NDDC Advisory council by Mr. President, the Commission would work closely with the governors so that there would be synergy and the problem of duplication of projects would be addressed. He noted that President Buhari inaugurated the NDDC advisory committee, consisting of the nine governors of the Niger delta region and the ministers of Niger Delta Affairs and Environment in line with the provisions of the NDDC Establishment Act.He declared ‘’I want a positive image for the NDDC. Therefore, we must collaborate with the National Assembly to change the situation. If there is a need to rejig the law, we will encourage the lawmakers to do that, particularly in the area of budgeting. We must budget for more regional projects that will impact the lives of the people. We must budget to bring industrial development, as well as bring about capacity building in the region’’. The NDDC Chief executive officer, speaking earlier, said that the new headquarters would add value to the NDDC towards meeting its mandate of facilitating the rapid development of the Niger Delta region.He stated ‘’ It is part of the mandate of the IMC to reposition the NDDC and make sure that the mistakes of the past are corrected and ensure that going forwards, NDDC will work towards realizing its mandate of fast tracking development in the Niger Delta region.The visiting team was received by the NDDC Acting managing director, Professor Kemebradikumo Pondei , in the company of the Acting Executive Director, Finance and Administration, Mr. Effiong Akwa, a member of the interim management committee, IMC, Mrs. Caroline Nagbo and directors of the commission.

Two sentenced to 20 years for $1m oil fraud in FCT