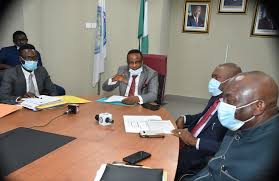 The Niger Delta Development Commission, NDDC, has inaugurated three committees to facilitate organisational reforms and drive the commissioning of completed projects across the Niger Delta region.

Speaking during the inauguration of the committees at the new headquarters of the Commission, the Interim Administrator, Mr Efiong Akwa, said that henceforth the Commission would emphasise the completion and commissioning of big ticket regional projects.

According to a release by the commission’s Director Corporate Affairs, Dr Ibitoye Abosede, Akwa who is the Chairman of the Headquarters Project Commissioning Committee, observed that the 13-floor new permanent headquarters at the Eastern By-Pass, Port Harcourt was completed with the support of President Muhammadu Buhari and the Minister of Niger Delta Affairs, Senator Godswill Akpabio.

Akwa said that President Buhari would be invited to visit the Niger Delta region and use the opportunity to commission the new headquarters building at a date that would be convenient for him.

He said: “It is a thing of joy that the headquarters which has been outstanding for over 20 years has now been completed. Now, we have a befitting headquarters building for the NDDC that is due for commissioning. We are looking at the end of January and the second week of February for the historic commissioning.”

According to Akwa, “seeing is believing. The people of the Niger Delta have always wanted to see the extent of services rendered by the NDDC as an interventionist agency. People are tired of listening to stories because they want to see physical projects on the ground. Over time, the NDDC has completed many projects that are due for commissioning.

“We cannot continue to deny members of the various communities the benefit of projects sited in their areas. Many projects have been completed but were not handed over to communities or end users. These include roads, bridges, schools, hostels and health centres.

The NDDC boss said that the Commission was making history by inaugurating a committee charged with identifying all completed projects and getting them ready for commissioning and handed over to the beneficiaries.

He noted: “It is important that we invite all key stakeholders to witness the commissioning ceremonies. This is what Niger Deltans and indeed Nigerians want to see. We are departing from the era when projects are executed and left to rot. Gone are the days when we just inaugurate projects and leave them without anybody taking ownership.

He said further: “When projects are commissioned and taken over by benefitting communities, they usually have cause to express gratitude to the Federal Government and the Commission because they are genuinely happy. Such gestures of appreciation will encourage Mr President to do more for the people of the region.

Speaking on the NDDC Reforms Committee, Akwa said that there was need for the Commission to look inwards and carry out reforms that would distinguish it as an institution that would deliver five-star services to the people of the Niger Delta region.

He said that the recommendations of the reforms committee would be forwarded to the Minister of Niger Delta Affairs for onward transmission to the National Assembly for the appropriate legislations.  He remarked: “We believe that some legislations will add value to the Commission.

For instance, we want to propose that the position of Executive Director Projects should be renamed as Executive Director Engineering and Technical Services. The recommendation will be turned over to Ernst and Young, the field forensic auditor in charge of programmes and activities at the NDDC headquarters for incorporation into its final report.”

The Chairman of the Project Commissioning Committee, Engr. Tonye George, thanked the Interim Administrator for giving them the privilege to carry out what he described as an important assignment.

He said that records showed that the NDDC had done so much to transform the rural communities, noting: “We are going to showcase all completed NDDC projects for the world and Nigerians to see what the Commission had accomplished over the years.”