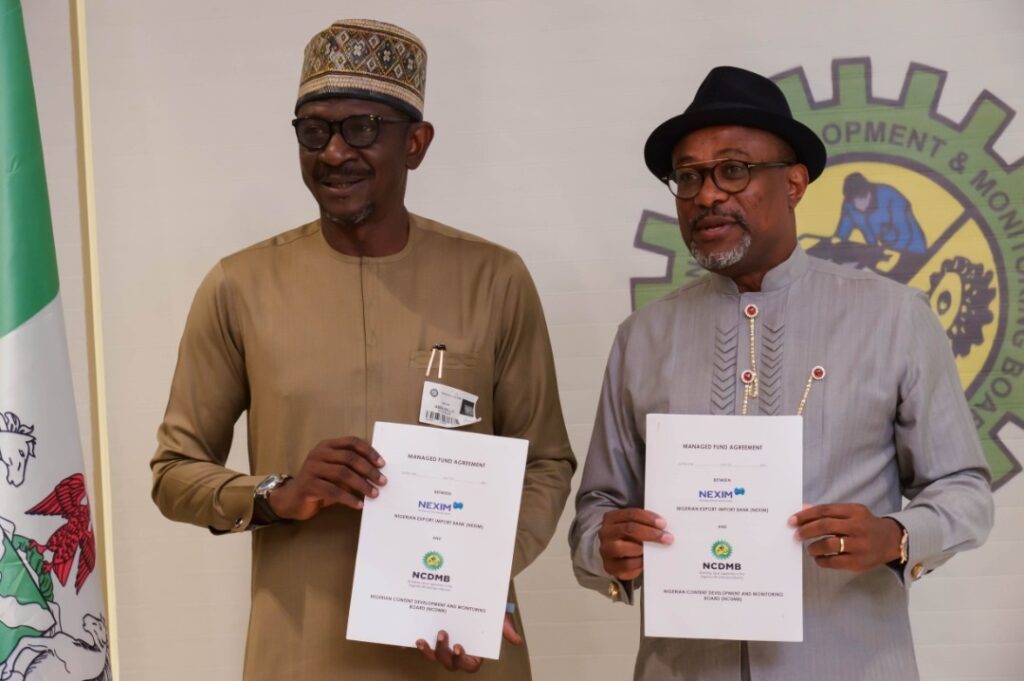 The Nigerian Content Development and Monitoring Board (NCDMB), the Nigerian National Petroleum Corporation and ZED Energy Limited has signed shareholders agreement on the construction of Brass Petroleum Products Terminal Limited (BPPT), to be located at Okpoama, Brass Local Government Area, Bayelsa State.
The estimated cost of the project is N10.5bn (Ten Billion, Five Hundred Million Naira). NCDMB and NNPC own 30 percent respectively while ZED Energy – a private firm holds 40 percent and would operate the terminal upon completion. The terminal would make refined petroleum products available at riverine communities of the Niger Delta at the standard prices, discourage the operations of illegal refineries and create job opportunities for citizens of the Niger Delta and other Nigerians.
The terminal would serve as a strategic reserve for the country as it would hold up to 50 million litres of products. It would also serve as a two-way product jetty – land and marine trucks loading of automotive gas oil (AGO), premium motor spirit (PMS), dual purpose kerosene (DPK) and aviation turbine kerosene (ATK).
According to the promoters, the project would enhance energy security in the Niger Delta and is expected to create 1000 direct jobs during construction and another 5000 direct and indirect jobs during the operations phase, because of the nature of downstream operations to create huge employment opportunities.
Minister of State for Petroleum Resources, Chief Timipre Sylva described the project as another major achievement of President Muhammadu Buhari in the Niger Delta region.
Listing some of the landmark projects, notably the Oloibiri Museum and Research Center (OMRC), the Brass Fertilizer and Petrochemical Company Ltd (BFPCL, the Nigerian Oil and Gas Park, among others, the Minister insisted that no former leader of the country had impacted the oil sector in the Niger Delta region more than President Buhari.
Sylva noted that residents of riverine areas had perpetually bought refined petroleum products at astronomical

prices because of the huge cost of transporting products to those locations. He also attributed the prevalence of illegal refineries in the region to the non-availability legitimate alternatives and expressed hope that the Brass Petroleum Products Terminal Limited (BPPT) would solve some of the problems of the Niger Delta region.
The Minister also commended the smooth collaboration between the NCDMB, NNPC and ZED Energy on the project, hinting that such partnership was needed to move the Nigerian oil and gas industry forward.
The Executive Secretary NCDMB, Engr. Simbi Kesiye Wabote underscored the economic benefits of co-locating the BPPT with the Energy Infrastructure Park being developed at Okpoama and the Brass Fertiliser and Petrochemical Company Ltd (BFPCL), at Odioma, Brass – both projects being developed with equity financing by the NCDMB.
He said: “If you go to developed economies, there are parks for manufacturing and industrialization. When you have the Brass Fertilizer, the BPPT and the refinery that is being built in the same area, you get the benefits of being within a Free Trade Zone. It will bring down the costs of developing those products simultaneously because the raw materials are just behind them. There is no reason to take the investments to distant locations where costs would increase.”
The Group Managing Director of NNPC, Mallam Mele Kyari said the national oil company should have invested in the terminal 30 years ago and expressed delight that it is happening now and would be delivered.

He said: “Beyond the clear social responsibilities, this makes business sense. The location of the planned depot would create a platform for the delivery of petroleum products to some of our offshore facilities
“NNPC is playing the role of facilitating the supply of petroleum products to all sections of this country, more importantly to the region that produce the resources, where refined products are not readily available. This initiative would make sure that we deliver products in the most fair and equitable means.”
Group General Manager, National Petroleum Investment Management Services (NAPIMS) and Project Lead of the BPPT, Mr. Bala Wunti noted that since the commencement of oil exploration at Oloibiri in Bayelsa in 1958, there has not been any significant downstream activity or investment in the state.
He further stated that Bayelsa State produces 40 percent of Nigeria’s onshore and swamp crude oil and hosts some of the nation’s Deepwater prospects and assets, yet there was no correlation with the level of socio-economic development and employment. “Our intention is that this adventure would try to close that gap,” he promised.
He also confirmed that the cost of the project had been estimated at N10.5bn (Ten Billion, Five Hundred Million Naira) and it was arrived from the pre-engineering and pre-front-end engineering design (Pre-FEED). He stated that the funds would come the partners and there are no risks regarding finance.
He added: “We have done our baseline survey and we want to start procurements of long lead items and several other things, including engineering. The idea is that long before 2023, we would have this depot up and running. It would bring a uniqueness and innovative depot platform. This will be a dual loading facility; it would load land trucks and marine trucks. It means we are creating something that is better that floating storage. It will also reduce demurrage. “

“I’m a Firm Believer In Creating Opportunities For The…