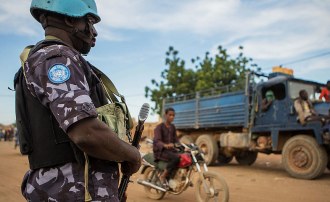 Trade unionists in San Francisco, in the United States, recently staged a peaceful demonstration at the Chinese consulate calling for the reinstatement of branch executive members of the Mineworkers’ Union of Namibia (MUN) at Rössing Uranium.

The branch executive committee members were fired last September for alleged gross negligence, bringing the company into disrepute and breach of confidentiality, following allegations by the union that the company had illegally hired four Chinese managers at the mine.

The protest, led by Steve Zeltzer of the United Front Committee For A Labour Party, called for the Chinese National Nuclear Corporation (CNNC), which bought the uranium mine in 2016 from Rio Tinto, to abide by Namibian labour laws.

“This is a serious issue, because China is one of the largest investors in Africa, Latin America and around the world, and like any other corporation or government, when they go into a country they should respect the workers of that country,” Zeltzer said.

Speakers at the event also opposed the USA’s imperialist envelopment of China.

They called on internationalists to back the struggle of not only Namibian workers, but all workers around the world employed by Chinese companies, and American and European capitalist companies.

The Japanese National Railway Motive Power Union of Chiba (Doro-Chiba) also put their weight behind the Rössing employees calling the move by the mine’s leadership (CNNC) to dismiss the unionists “a violent infringement of the union contract and a shameless attempt at bribing”.

“All these are nothing but desperate attempts of destroying your fighting union. We are deeply moved and inspired to know that you have resolutely launched to fight back this assault with angry union members of the Rössing branch,” said the international labour solidarity committee of Doro-Chiba in a letter to CNNC management.

The nine involved employees’ labour arbitration hearing will take place on Monday 15th March at the labour commissioner’s office at Swakopmund to decide on their dismissal.