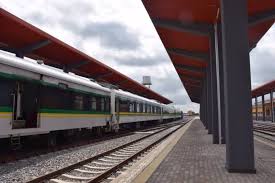 President Muhammadu Buhari late in September, inaugurated the 326km Itakpe-Ajaokuta-Warri rail line for commercial operation, after over 30 years of delay,

At the inauguration, which held virtually, the president flagged off the ancillary facilities yard at the recently named Goodluck Jonathan Railway Complex in Agbor (Owa-Oyibu), Delta State and directed the Federal Ministry of Transportation to link all the nation’s ports of origin and destination – Apapa, Tin Can, Warri, Onne, Calabar Ports- to the rail network in order to significantly improve overall transportation and economic capacities.

“Accordingly, I have approved the prioritisation of viable railway routes for either new rail lines or the reconstruction and rehabilitation of some, to achieve effective and efficient train services supporting the country’s trade and commerce.

“The Railway Infrastructure that I have the honour to commission today is the rail line from Itakpe via the steel town complex of Ajaokuta to Warri, and is an important link for the country’s economy as the central rail line.

“This government has also approved to link this line further from Itakpe to Abuja, thereby, connecting the Northern Zone of the country and also extending southwards to link the Warri Ports,” Buhari was quoted as saying in a  statement by presidential spokesman, Femi Adesina.

Noting the importance of the rail line, the president said: “It will link people across the cultural divides and expand the frontier of trade and commerce, which will lead to better standards of living for our citizens.”

He urged all beneficiaries of the rail line to protect it saying: “I implore those who work on this line to uphold maintenance and safety culture necessary for long-lasting service in this difficult terrain.

“By the same token, I urge other sectors who will be primary beneficiaries of this transportation backbone, including, the iron and steel sector, stakeholders in agricultural and mining sectors on this corridor, as well as the host communities to protect and sustain this infrastructure and maximize the benefits that could be derived from it and which is readily available at their doorsteps.

“This project will increase the volume of their trade and kickstart and resuscitate the iron and steel complexes. All these, I hope will improve our industrial potentials and capacities as well as boost employment.”

In the nation’s bid to achieve economic prosperity and rapid development, the Federal Government under the military regime of Gen. Ibrahim Babangida, in 1987, awarded a contract to build the central line, a standard gauge railway to connect the iron ore deposits at Itakpe to the Ajaokuta Steel Mill and the Atlantic Ocean port of Warri. The railway was originally planned for completion in five years, but irregular funding stretched out its construction period over 30 years.

In August 2017, the Minister of Transportation, Rotimi Amaechi, announced that the railway would be completed by the China Civil Engineering Construction Corporation and Julius Berger.

Realising the economic benefits of extending the rail line to the Federal Capital Territory (FCT) Abuja, the Federal Government in October 2019, signed a $3.9 billion contract with the China Railway Construction Corporation Limited to extend the railway to the nation’s capital.

The realisation of the long held dream of completing the rail corridor by the Federal Government after many years, will not only assuage the economic challenges  of low-income earners in the axis, it will bring great investment opportunities and encourage investors to collaborate with the federal and state governments to explore existing investment windows, which will lead  to creation of jobs and wealth for the locals.

The significance of the rail line cannot be overemphasized, considering  that it is connecting the oil-rich region of the South-south and industrious South-east with the agricultural and solid mineral hubs of the North-central and North-west linking the country’s Capital, Abuja, which makes it one of the most important asset of the nation..

The  directive by the president that the rail line should  link all the nation’s ports of origin and destination – Apapa, Tin Can, Warri, Onne, Calabar Ports ­­– will significantly improve overall transportation and economic capacities of the country.

Speaking on the rail recently, Amaechi said: “Railway is about cargo and the MD has just told me that they will bring their pipes from Warri port and we transport it for them. That’s money! Any production from Ajaokuta will be conveyed by this rail track and I’ve been told they are discussing with Dangote and BUA cement.

“The essentials for this will be cargo and it will start immediately the rail starts working. We will be ready, but I don’t know if they will be ready.”

The statement of the minister shows the economic importance of the rail infrastructure to the country. There are  projections that the commencement of  the Itakpe-Ajaokuta-Warri Rail line will account for close to one million passengers annually,  unleashing approximately 3.5 million tones capacity of freight annually that will service all off-takers on the corridor and beyond.

However, poor maintenance culture seems to be an inherent challenge in Nigeria. Now that the rail line is up and running, stakeholders, including the host communities, should maintain and protect this infrastructure.

“We will know if NRC (Nigerian Railway Corporation) has done a good job when they manage it properly because the issue is maintenance. I don’t want to come here in the next four, five years and it looks worn out. I have seen the toilet facilities they look good, but typical of us, I hope in the next five years it will be intact because in Kubwa now, those things look worn out, if you break anything, replace it or repair it. I think we should learn to maintain the infrastructure that we inherit,” Amaechi said recently at the test run of the rail line.

Just like the president said during the inauguration of the project, all Nigerians in the transportation industry, particularly those in  the railway sub-sector, should continue to support the Federal Government in its commitment to achieving other railway infrastructure projects in the country.

Some of these projects include the completion of Lagos-Ibadan rail line, Lagos- Kano; Kaduna-Kano; Ilorin to Ibadan rail lines, which will create approximately 30,000 jobs during construction.