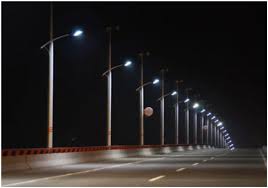 President George Manneh Weah is expected this February to formally light up the streets of Monrovia and its environs, according to the Executive Mansion.

A press release issued says President Weah is expected to turn on the switch at Vai Town, Bushrod Island to light up the Johnson Street to Freeport corridor.

The Executive Mansion says “Presidential Street Light Project” was initiated by Mr. Weah not only for the beautification of Monrovia, but to also provide security for drivers, pedestrians, and other residents of the city. The President has promised that the initiative will be extended to other nearby streets.

The project, funded entirely by the Government of Liberia, is being implemented by the Ministry of Public Works with technical support from the Liberia Electricity Corporation (LEC) and Quality Group of Companies serving as Contractor, the release says.

In a related development, President Weah has issued an Executive Order that exempts the LEC from customs duty, GST on generation, transmission and distribution equipment, material and fuel.

According to the Executive Mansion, this is consistent with his commitment and passion to accelerate the spread of electricity across the country.

Executive Order 104, which was issued on 3 February, seeks to reactivate Executive Order #9 which has since expired at the time the Government of Liberia is creating every avenue to expand its use of hydroelectric power generated at the Mount Coffee facility to deliver affordable electricity to customers.

President Weah says the Executive Order is in the interest of national reconstruction and development.

He maintains that the Executive Order is imperative because the LEC, during its transition from the use of fossil fuels to hydropower to generate electricity, faces external market forces and risks that increase the costs of operations of the entity.

President Weah continues that there is still a need to minimize the cost of fuel to enable the LEC to provide electricity to the general public at a reasonable cost.

He explains that some of the costs which are associated with the purchase, delivery, storage, and use of fossil fuels, particularly Heavy Fuel Oils (HFO), represent a significant expense to LEC, which slow investments in the transition to the wider use of hydroelectric power in Liberia.

President Weah also intimates that it is necessary for the LEC to achieve what he calls “higher levels of operational and financial efficiencies” to enable it to distribute electricity at affordable rates to customers.

Customs Duties and GST on petroleum products are LEC cost categories that have the potential for volatility that adversely impacts the monthly expenses of the Corporation.

Nigeria: Govt to Establish Artisanal Miners’ Clusters in Ebonyi, Others