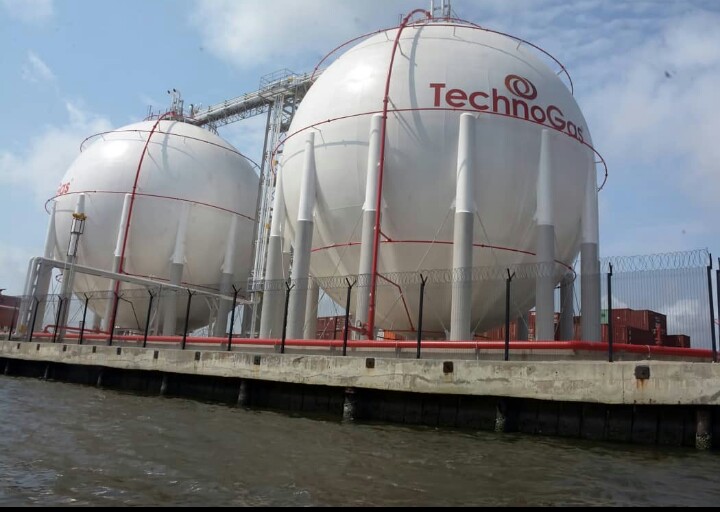 The Lagos State Govt has lauded Techno Oil Ltd. for building a landmark 8,400-ton capacity LPG Coastal Terminal at Kirikiri in Apapa, Lagos.
Sanwo-Olu gave the commendation on Wednesday in Lagos in a message read on his behalf at the commissioning of the LPG Terminal by the state’s Commissioner for Energy and Mineral Resources, Mr Olalere Odusote, said that the management of Techno Oil had demonstrated an uncommon resolve to contribute to the emancipation of Lagos State.
He recalled the building of an LPG cylinder manufacturing plant in Lagos State last year, describing the gas sector as a key component of his administration’s quest to make Lagos a 21st Century economy.
The governor said that he strongly believes that pivoting Lagos State to a gas-powered economy would offer an array of economic and environmental benefits to its residents.
“Developments such as this will help to promote and deepen domestic LPG utilisation across the state, thereby reducing the state’s carbon footprint and ultimately benefiting the people of Lagos State and Nigeria as a whole.
“As the major economic, commercial and financial nerve- centre of the federation as well as the fifth largest economy in Africa, Lagos State is a major hub for the downstream sector of the oil & gas industry.
“We are hosts to strategically located petroleum product storage facilities and primed for the growth in gas usage.
“Lagos is by far the largest consumer of petroleum and gas products in Nigeria.
“Indeed, in establishing this 8,400-ton capacity LPG Coastal Storage Terminal in Lagos, Techno Oil has made a strategic investment.
“It is a significant step that will accelerate and deepen the growth of LPG to help diversify the economy, grow revenue and create jobs,” he said.
The governor charged Techno Oil and other downstream players to work closely with Lagos State in ensuring safety and promoting best practises in the sector.
“We must be jointly responsible for the protection of lives and property by ensuring a strict adherence to policy and regulatory measures that promote safety. Safety must be in the DNA of all practitioners in the gas industry.
“We have the paramount duty of institutionalising a culture of safety and professionalism in the industry and my administration is committed to an all-inclusive and participatory effort that will accelerate growth in the sector,’’ he said.
Similarly, in a message, the Honorable Minister of State for Petroleum Resources, Dr Timipre Sylva said that Nigeria had ear-marked the year 2020 to be the beginning of the decade of gas.
According to him, this is a period in which the national economy is programmed for expansion using the abundant natural gas resources of the country.
Sylva, whose message was read by Dr Musa Zaki, a Deputy Director in the Department of Petroleum Resources, said that central to the aspiration was the deepening of LPG penetration in the country.
He noted that the deepening of cooking gas would reach a point when both domestic and commercial food cooking would be fuelled by LPG.
The minister said that having built an LPG cylinder manufacturing plant, producing five million cylinders per annum and inaugurating the 8,400MT automated terminal, Techno Oil was on course to providing end-to-end solutions in the domestic LPG industry.
“The commissioning of this facility is definitely a good contribution to the two aspirations cited above in addition to environmental protection, job and wealth creation by reducing deforestation and greenhouse emissions and promoting domestic gas value-chain development.
“With the inauguration of this facility, there are now 12 LPG depots in the country and we are gradually marching to our expected destination in LPG adoption.
“It should be noted, however, that the Nigerian LPG market is still not saturated. There are huge opportunities for further investments in the entire domestic gas value-chain.
“These include gas processing, transportation and distribution, storage, retailing, manufacturing of equipment and provision of services,” he said.
In a speech, Mrs Nkechi Obi, the Group Managing Director/Chief Executive Officer of Techno Oil, said that the terminal would generate up to 2,000 jobs in the months ahead.
Obi pleaded with the Federal Government to come to the rescue of Nigerian industrialists in their bid to contribute to the economic growth of the nation.
“We plead with government to provide funding to industrialists in building key facilities such as the one being commissioned.
“Government should consider reactivating its butanization plants and also building new ones across the country to guarantee LPG availability nationwide.
“Similarly, it is also time for government to embark on media campaign to sensitise the populace on the benefits of LPG over other cooking fuels.
“More so, government agencies and regulatory bodies should enforce the rules to sanitise the space for a safe and profitable business environment.
“We remain thankful to the Lagos State government for being a worthy host by providing the much appreciated conducive environment for our business to thrive.
“This is yet another of our numerous projects being hosted in Lagos. We thank you from the bottom of our hearts.
The Chairman of the Board of Techno Oil, Prof. Anya O. Anya, lauded the staff and management of Techno Oil for embarking on the project.
He said that young people in the country were increasingly demonstrating their abilities to make thing happen in every field of human endeavor.