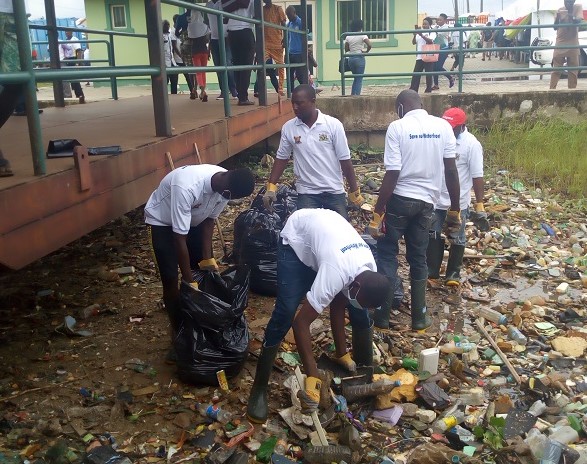 The Lagos State Commissioner for the Environment, Mr Babatunde Durosinmi-Etti, has urged the residents of the state to always protect the marine environment due to its socio-economic values.

Durosinmi-Etti said this on Thursday, September 6, 2018 during the clean-up of Ibeshe Waterfront in Ikorodu, marking the maiden edition of the Clean-up of Lagos Waterfront.

He said that residents should stop littering the roads, streets and highways with wastes, as such always find their ways into the marines.

Durosinmi-Etti said that Lagos State contributed more than half of wastes to the nation’s waterways.

The commissioner said that was due to the increasing population of the residents of the state which he put at over 22 million.

He also attributed it to the improper disposal of wastes by the residents.

The commissioner said that data generated in 2010 and captured in a Wall Street Journal Publication of Feb. 12, 2015 showed that Nigeria ranked 9th on the list of countries polluting the oceans and the waterways the most.

According to him, Nigeria contributes 0.34 million metric tonnes of mismanaged marine plastic debris.

“It will be safe to infer that more than half of these quantities emanated from Lagos, being the most populated of the country’s coastal states.

“Cleaning the waterfronts will amount to efforts in futility if the debris/wastes still continue to find their ways back to the waterways and the shorelines.

“We must, together, as a people resolve to stop this menace by embracing best waste management practices.

“We must live by example and encourage our neighbours, relatives, and friends to do same,” he said.

The commissioner said that the clean-up of Ibeshe Waterfront underscored the collective resolve to protect the Mother Earth, of which the waterfront was part.

He said that Lagos, like many other mega cities of the world, was faced with a wide range of socio-economic and environmental challenges; one of which was pollution.

Durosinmi-Etti said that pollution of the marine environment had become a major source of concern globally, in view of the socio-economic and public health implications.

He said that the marine environment was a delicate one that should be protected.

He said that this was because it served as the source of water for socio-economic activities such as transportation, power generation, and irrigation.

According to him, the water bodies serve as habitat to aquatic life, which must be protected to ensure a balance in the ecosystem.

“The Lagos Lagoon and the other lagoons, rivers and streams have their shares of pollution and degradation.

“This is ranging from deliberate dumping of wastes and untreated sewage to discharge of untreated effluents into them.

“The menace of plastic wastes and the attendant impacts on the aquatic environment has become a global concern.

“The issue made the United Nations to dedicate this year’s Earth Day and the World Environment Day celebrations to addressing plastic pollution.

“As we clean-up the waterfronts in the state, we must not forget that most of these wastes emanate from the inland and we must ensure that they do not find their way back into the waterfront,” he said.

Also, the Permanent Secretary in the ministry, Mr Abiodun Bamgboye, said that the consistently increasing population of the state had an attendant consequence on waste generation and management.

Bamgboye said that the clean-up was a commitment by the government to protect the environment and public health.

He said that the water bodies were priceless gifts of nature with huge aesthetic, tourism and economic values.

“As a people, we owe it a duty to ourselves and future generation to preserve these priceless gifts of nature,” he said.

Mr Monday Ayejuni, a fisherman said that the clean-up would help to keep the water environment clean and make their fishing work better.

Ayejuni said that it would ensure that there were no plastic items choking the fish.

Another fisherman, Mr Emmanuel Emiloju, said the clean-up would ensure that more customers patronise them.

The News Agency of Nigeria (NAN) reports that the exercise was in collaboration with Nigerian Ports Authority (NPA), and Eco Bank Plc.

EU finances construction of public toilets in 14 towns in Ekiti