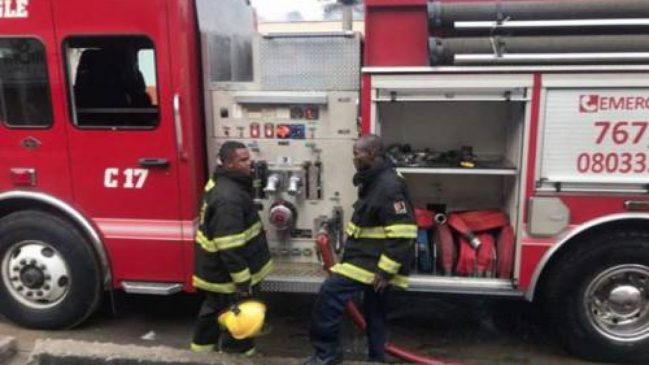 TBI  Africa correspondent at the scene reports that as at 7.15p.m., the fire which left at least 15  dead and destroyed more than 70 buildings,  was still raging at Abule Ado, near Festac Town, Lagos.

Also, as at the time, some  students of the Bethlehem School, owned by the Catholic Church, were still feared trapped in rubbles which their school was reduced to by the explosion.

The emergency management agencies had to deploy an excavator as at 6.30p.m in an intensified  effort to ensure no one would remain trapped.

The fire has, however, been reduced.

The explosion has left many residents of the community confused.

Our correspondent saw some of those rendered homeless by the explosion carrying some luggage on their heads and vans moving out of the community.

One of them, who did not mention his name,  said that he was  going to his relative’s house to stay.