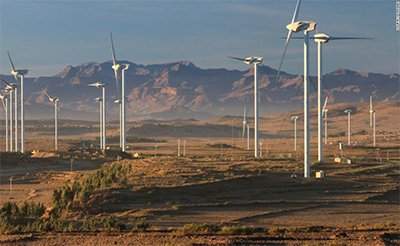 Johannesburg, South Africa. 13 September 2021. While Kenya’s oil generation capabilities have been small to date, the country has made significant strides in terms of renewable energy – and further potential remains.

Kenya will be one of eight East African countries to attend Africa Oil Week (AOW) in November 2021. AOW will be held temporarily in Dubai this year as a Covid-19 precaution, before returning to its home in Cape Town, South Africa from 2022. Kenya joins Uganda, Ethiopia, Somalia, Rwanda, Djibouti, Eritrea and Burundi, all of which will be sending ministerial delegations to Dubai.

Kenya will be taking centre stage at AOW, with Cabinet Secretary for Petroleum and Mining Hon. John Munyes confirming his attendance. He will both present at high-level ministerial panels as well as at a dedicated national energy showcase featuring Leparan Gideon Morintat, Chief Executive Officer of NOC Kenya, and Daniel Kiptoo Bargoria, Acting Director General of Kenya’s Energy and Petroleum Regulatory Authority.

“Kenya is without a doubt one of the most compelling energy economies on the continent,” says Paul Sinclair, Vice President of Energy for AOW. “Following a recent engagement with its ministry, it is clear this year’s investment drive at AOW and Future Energy Series: Africa will be fascinating. Kenya has a developed robust policy to support large capital inflows into the sector and we are excited to see the best of what it has to offer.”

The Kenyan government has sought to expand renewable energy generation in its overall power development plan for the period between 2017 and 2037. It projects that, by 2037, renewable energy sources will provide over 60% of the country’s installed power capacity.

In recent years, measures to promote investment in the renewable sector have been passed by the government, including the enactment of a new energy act in 2019 that aims to develop the sector. New authorities to regulate the production, conversion, distribution, supply, marketing and use of renewables have also been established, and incentives for renewable energy generation have been employed. These include certain stamp duty exemptions, tax benefits, and the development of public-private partnerships between the government and renewables companies.

Collectively, these efforts are helping to put Kenya’s renewable energy industry on the map.

This is not to say, however, that the situation is without its difficulties. In procuring geothermal power, Kenya must allow for the long lead time – between five and seven years – expected from concept to production. What’s more, the upfront investment costs will be high, and heavy investment in transmission and other support infrastructure to existing load centres will be required. There will also be a high amount of resource exploration and development risk.

In hydro power generation, the challenges are similarly numerous. Hydrology and climate change variation is affecting the water levels in reservoirs, people will need to be relocated and resettled to make room for the construction of new reservoirs, and hydropower management has been affected by the absence of synergies and competing interests.

That said, Kenya’s growing expertise in this space should stand it in good stead. “Kenya has always been a frontrunner in the renewable energy space,” Sinclair adds. “From highly successful projects such as the Lake Turkana Wind Project to the current mini-grid and hydro projects under the Kenya National Electrification Strategy, the country has – and will continue to be – a flagbearer for the diversification to green and clean energy.”

Much of this will be discussed at AOW’s 27th groundbreaking investment meeting.