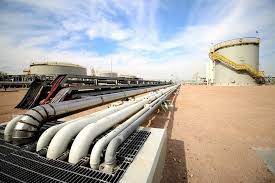 Iraq has signed a heads-of-agreement deal with French firm Total spanning four projects involving natural gas, solar energy and seawater reprocessing, the oil ministry said on Monday.
Total will make a “multi-billion-dollar” investment and the four initial deals will be submitted to the cabinet for final approval, Oil Minister Ihsan Abul Jabbar was quoted as saying in a ministry statement.

The agreement was signed during a visit by Total CEO Patrick Pouyanne, it said.

Total will build a facility to produce natural gas at five southern oilfields West Qurna 2, Majnoon, Artawi, Tuba and Luhais, the ministry said in a statement.

It is expected to produce 300 million cubic feet of gas per day (mcf/d) and double that after a second phase of development, it said.

Total will also take hold of a seawater injection project, on hold for a decade, which is core to the development of southern oilfields which account for most of Iraq’s production.

It will have the capacity to treat 2.5 million barrels of seawater per day initially and aims partly to flush oil to the surface. It is expected to help overcome declines in output from fields such as Rumaila, West Qurna, Zubair and Majnoon.

Total will also help boost output from the Artawi oilfield to 200,000 barrels per day of oil (bpd) from 60,000 bpd now, the statement said.