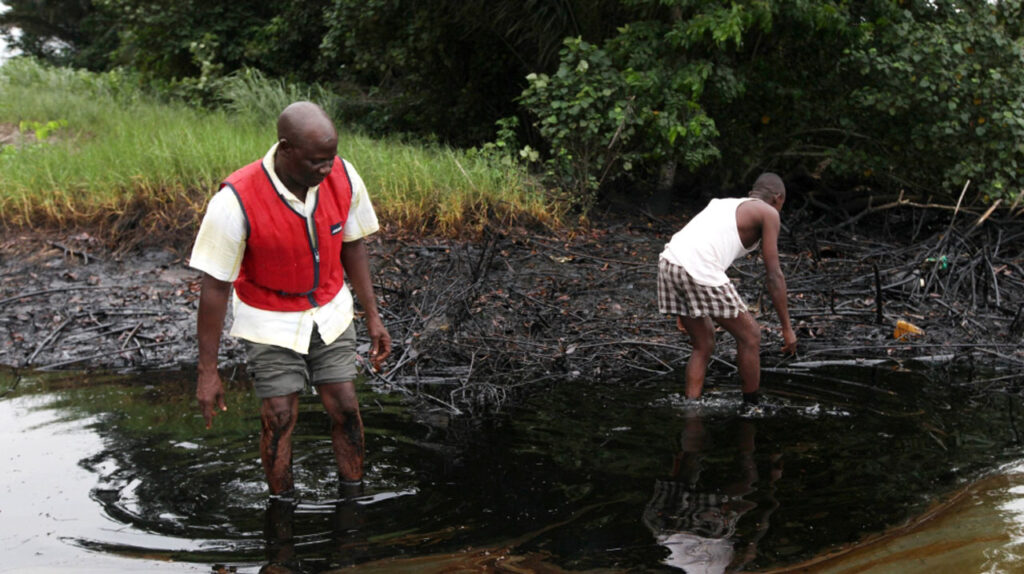 It has been learnt that Massive oil spill has occurred in Bayelsa State polluting creeks and communities.

The spill which occurred on Sunday from facility suspected to belong to the Nigerian Agip Oil Company (NAOC), happened between Ogboinbiri and Keme-ebiama communities in Southern Miss Local Government Area of the state.

The Apoi Creek is said to be flooded with fresh crude oil spreading to downstream communities like Keme-ebiama, Kokologbene, Apoi, and up to Gbaraun.

The cause of the spill is yet to be established but it was gathered that officials of the oil major had been alerted to the incident.

Officials of the Environmental Rights Action/Friends of the Earth Nigeria (ERA/FoEN) have disclosed that what looked like an extensive oil spill occurred on Sunday, November 29, in state.

The spill, according to them, came off a yet-to-be-properly-identified facility belonging to an oil major.

He said the entire river is covered with crude just as members of the communities are lamenting because that is the only source of water both for bathing and cooking.

Jakpor said: “ERA/FoEN will visit within the week and, hopefully the exact facility and cause of spill would have been identified. As usual, ERA/FoEN will get related testimonies from community folks too; even if we cannot cover the entire impacted communities.”

“It is important that the regulators swing into action to contain the spreading crude oil, stop the leak and follow up immediately with cleanup after a Joint Investigation Visit to determine cause of spill and other details.”

Also, ERA/FoEN’s head of Yenagoa office, Alagoa Morris, said as a grassroots organisation working with communities and other stakeholders on environment, the environmental group enjoys the goodwill of getting related information quite early most often.

He said: “As usual, we received calls and Whatsapp messages today (Sunday) from our trusted contacts, informing us about what was described as a massive oil spill which occurred this morning from yet to be properly identified facility around the Ogboinbiri and Keme-ebiama environment.

“The cause is yet to be identified, as Joint Investigation Visit to the site is yet to be embarked upon by the regulators, facility owner and communities concerned. We hope that would be done within the next one or two days.

“However, from video clips and photos received via WhatsApp; it confirms what our contacts said that crude oil is spreading on the Apoi Creek and, in some places, the entire creek is covered with the black gold.

“Knowing that the communities along the creek have no other sources of drinking water; this oil industry induced pollution would further heighten their environmental challenges, especially in terms of use of water for bathing and other domestic uses. It is worse now that the rainy season has just ceased too.

“So, both in terms of fishing and domestic water needs, the people would suffer denial. And, as it spreads, more communities downstream would be affected. Already, ERA/FoEN reliably gathered communities like Keme-ebiama, Kokologbene, Apoi and Gbaraun have been affected. Others like Lobia are most likely to be affected before tomorrow as the current takes it on.

“Oftentimes oil companies deny spread of crude oil on moving bodies of water. And, this may not be an exception, even though they know the truth. They deny just to avoid liability, leaving victims to lick their wounds.”

He hoped that Oil Company responsible and regulators would take the necessary steps to stop and contain the situation, noting that ERA/FoEN would, as a long standing tradition, visit one or two of the impacted communities within the week to ascertain the situation and get firsthand testimonies from victims.

He added: “This is Agip’s Swamp Operational Area in Bayelsa State and it is the major oil industry operator in the environment. The company’s Ogboinbiri flow station is located at Ogboinbiri within this spill environment.

“Agip is extracting crude oil and gas from over 40 functional oil wells in Ogboinbiri alone; with pipelines linking other oil facilities far and near.”

petrol stations will be required to install auto gas facilities-DPR