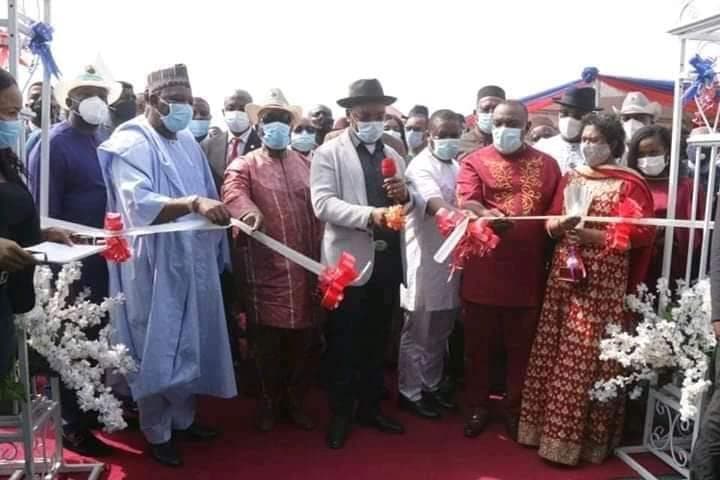 This is in line with his avowed determination to reposition the state towards becoming the most efficient maritime hub in the Gulf of Guinea and with a resolve to attract more private investments to Akwaibom.

The event which took place at the Shipyard located along the Oruk-Anam axis of the East-West road also culminated in the official unveiling of the multi-billion naira shipyard by the Governor.

The security vessel which is up for charter and direct purchase for security, as well as oil and gas-related services, is a historic endorsement of the industrialization agenda of the Udom Emmanuel led administration by the private sector and the readiness of Akwa Ibom to take advantage of the vast opportunities in the nation’s maritime, and oil and gas industry.

Speaking on the occasion, Governor Udom Emmanuel reiterated the readiness of the state government to partner the Norfin Group, lauded the investor, Engr. Charles Udonwa, a Singaporean based shipbuilder for his decision to site the shipyard in the state, noting that the gesture was worthy of emulation.

He condemned the recent attack on the shipyard and charged the host community to see the investment as an asset that must be protected, noting that irrespective of the location, the shipyard would benefit the entire country.

“Today marks the harvest of seed. In the entire Gulf of Guinea, we don’t take this for granted. But it is worthy of emulation. I hope the host community will behave well. My brother Charles I share your pains in the last attack. Whatever we are going to do as a state government to ameliorate that pain, we will do. Locating this facility here is for the benefit of the entire country”, he stated.

Also speaking, Secretary to the Government of the Federation, represented by the Minister of State for Power, Engr. Goddy Jerry Abba, assured of the readiness of the federal government to partner the company.

On his part, the Commissioner for Trade and Investment, Barr. Prince Ukpong Akpabio said the Udom Emmanuel administration is determined to partner Norfin Group towards rebuilding an industry that will contribute in high percentage to Nigeria’s GDP, and also create job opportunities for Akwa Ibom youths.

Chairman of Norfin Group, Engr. Udonwa appreciated the state government for ensuring an enabling environment, saying his company’s presence in the state will help Akwa Ibom become a major player in the nation’s oil and gas industry.