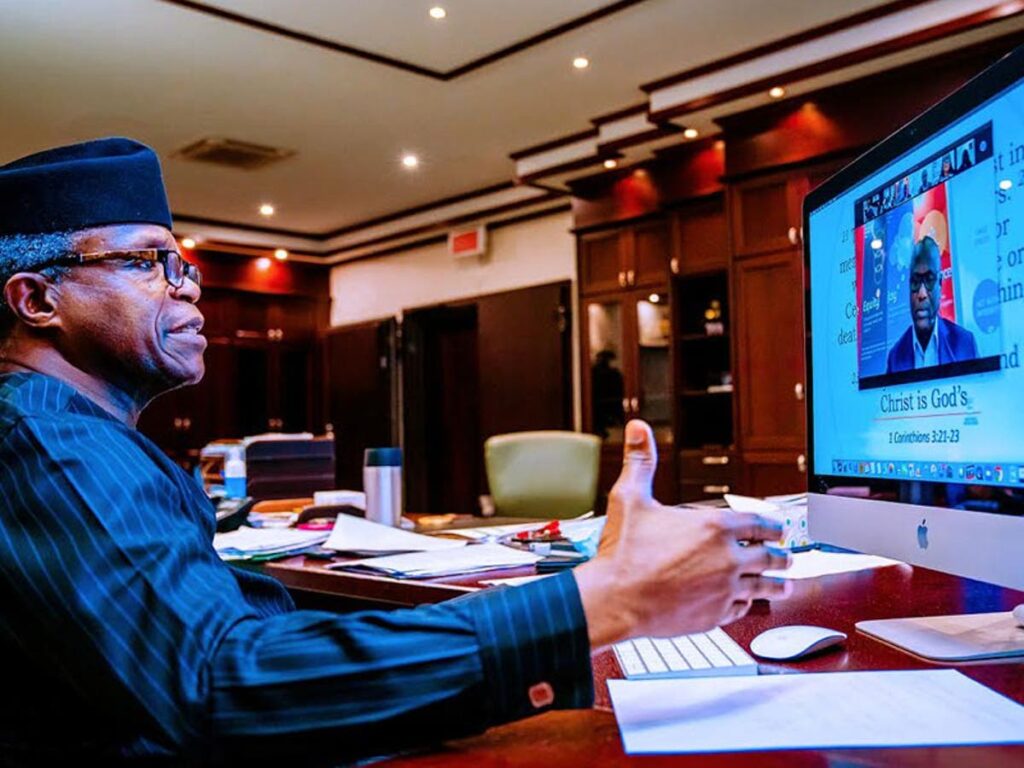 The Federal Government has made efforts to douse tensions caused by the hike in petrol price and electricity tariff saying the subsidy removal and the increase in cost of the two items was not to hurt Nigerians rather save Nigeria from economic ruin.

This was said by the Vice president, Professor Yemi Osibanjo at the opening of a three- day ministerial retreat in Abuja. Osibanjo who represented President Muhammadu Buhari to declare open the retreat, following the president’s trip to Niamey, Niger Republic capital to attend the Ecowas Summit on COVID-19, denied imputations that the Buhari administration was insensitive by hiking fuel price and electricity tariffs at the same time.

He said in view of the subsidy removal, fuel price would continue to rise as the cost of crude oil recovers in the international market. According to him, the current hike in fuel price is not a fresh development rather a product of deregulation of the downstream petroleum sector earlier in the year following the fall in the prices of crude oil in the international market because of the effects of COVID-19 on the global economy.

However, he explained that the government would not allow independent marketers to take advantage of the situation by arbitrarily hiking petrol prices. He added that the PPPRA has provided a price ceiling that marketers must not exceed and with the deregulation of the oil sector, more marketers are free to import petrol

According to him, with more entrants into the market, the competition will increase, which would kindle the law of supply and demand that would eventually force down the price of petrol. He said ‘’Nevertheless, I want to assure our compatriots that the government will remain alert to its responsibilities, the role of government now is to prevent marketers from raising prices arbitrarily or exploiting citizens. This was why PPPRA made the announcement a few days ago setting the range of price that must not be exceeded by marketers’’

‘’the advantage we know have is that anyone can bring in petroleum products and compete with marketers, that way the price of petrol will keep coming down.

‘’the other painful adjustment that we have had to make in recent days is a review of the electricity tariff regime. If there is one thing that we have heard over and over again, it is that Nigerians want consistent and reliable power supply.

‘’so, the power sector remains a critical priority for the administration. Protecting the poor and vulnerable, while ensuring improved service in the power sector, is also a majority priority for the government. And our policies, like the social investment programmes and other socio-economic schemes to benefit Nigerians, show that we remain focused on improving the welfare of the common man’’

Osinbajo said like many Nigerians, he was not happy with the quality of services being provided by the distribution companies (Discos), causing the federal government to allow the Discos to make tariff adjustments as determined by guaranteed improvement in supply.

He said that with this arrangement, only consumers with guaranteed power supply for 12 hours could have their tariffs adjusted, while those who experience supply below 12 hours would pay the old tariffs. He added that following the arbitrarily estimated billing by Discos, a move aimed at metering five million Nigerians, with the meters produced by local manufacturers has begun.

As stated by him, the new metering arrangement would create jobs while the National Electricity Regulatory Commission (NERC) has been directed to strictly enforce capping regulation to ensure that unmetered consumers are not billed above their metered neighbours.

‘’the recent service based tariff adjustment by the Discos has been a source of concern for many of us. Let me say frankly that like many Nigerians, I have been very unhappy about the quality of service given by the Discos. That is why we have directed that tariff adjustments be made only on the basis of guaranteed improvement in service. Under this new arrangement, only customers who are guaranteed a minimum of 12 hours of power and above can have their tariffs adjusted’’ he said.

He also revealed plans by the federal government to supply a solar power system to five million homes within 12 months, adding that the plan would be favourable to 25 million citizens with the Central Bank of Nigeria (CBN) providing the financial backing for manufacturers while the scheme would create 250,000 jobs. The metering arrangement would also provide 50,000 jobs thereby bringing the job creation target in the sector to 300,000.

He said the simultaneous fuel hike and increase in electricity tariff is a mere coincidence saying the tariff adjustment was mainly about establishing a system to ensure improved service for consumers at a fair and reasonable price.

‘’there has been some concern expressed about the timing of these two necessary adjustments. It is important to stress that it is a mere coincidence in the sense that the deregulation of PMS prices happened quite some time ago, it was announced on 18 march 2020 and the price moderation that took place at the beginning of this month was just part of the ongoing monthly adjustments to global crude oil prices.

‘’similarly, the review of service-based electricity tariffs was scheduled to start at the beginning of July but was put on hold to enable further studies and proper arrangements to be made,’’ he said

He said the government would not deliberately inflict hardship on the people and it is not insensitive as the ministers and other senior officials have been tasked to diligently implement the economic sustainability plan.

‘’In order to mitigate the effects of the developments on Nigerians, CBN had created credit facilities to the tune of N100 billion for healthcare and N1 trillion for manufacturing. From January 2020 to date, over N191.87 billion has already been disbursed for 76 real sectors projects under the N1 trillion Real sector scheme; while 34 healthcare projects have been funded to the tune of N37.159 billion under the Healthcare Sector Intervention Facility. The facilities are meant to address some of the infrastructural gap in the healthcare and manufacturing sector as a fall out to the COVID-19 pandemic and to facilitate the attainment of the governors’’ five year strategic plan’’ he added

The Managing Director and Chief Executive of Financial Derivatives Company Limited, Mr Bismarck Rewane in an interview with Arise news channel has also said the removal of subsidy and increase in electricity tariffs would boost investments in the downstream sector of the oil and gas industry and power sector. He said the subsidy removal would encourage investments in private refineries such as Dangote Refinery, while the tariffs increase would help the power companies to invest in metering, network expansion and also improve generation.

‘’investments will increase. It will boost investments in private refineries such as Dangote refinery while those who will buy our dilapidated refineries will come. Nobody is justifying any increase but where will the revenue come from? There is no appropriate time, if not now, when? If not you, who?

NDDC to produce one regional road map for development in…