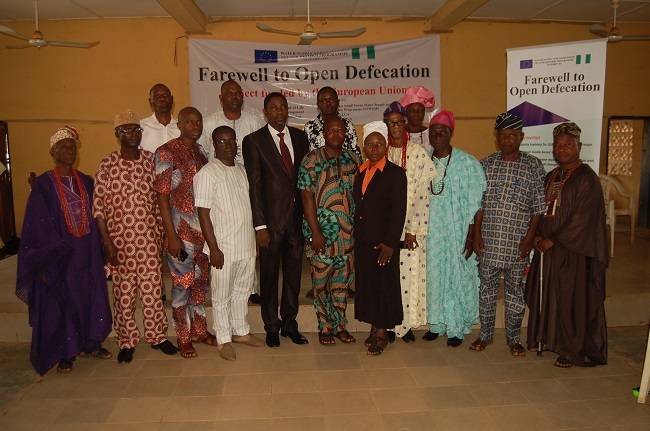 EU finances construction of public toilets in 14 towns in Ekiti

The European Union is financing the construction of model public toilets in 14 small towns in Ekiti West and Gbonyin Local Governments, Ekiti State, under its Water Supply and Sanitation Reform Programme (WSSSRP) III.

Ekiti State has a safe sanitation coverage of 32% in rural and small towns, and 38% in urban towns; open defecation which is 68%, is the highest in the southwest Nigeria according to State Water, Sanitation, and Hygiene (WASH) policy. In Gbonyin local government, a UNICEF 2014 survey shows that 92% of the communities are without public latrines; and in Ekiti West local government, 124 communities do not have any form of public latrines, according to the Ekiti West WASH profile 2014 report.

The overall objective of the project, whose contract is already signed by the the contracting authority – National Authorising Officer/The Honourable Minister for Budget and National Planning and the European Union Delegation to Nigeria on April 29, 2018, is to strengthen  water and sanitation (WASH) governance institutions; increase prioritisation and funding of WASH sector by public and non-public actors; and  increase access to sustainably managed, safe Sanitation WASH facilities  in 14 Small towns in Gbonyin and Ekiti West Local Government Areas (LGAs), Ekiti State.

The project will result in the construction of modern public toilets in 14 small towns in Ekiti state between October 2018 and May 2019. The benefitting towns are: Iluomoba, Agbado, Egbe, Imesi, Ijan, Aisegba, and Ode in Gbonyin LGA; and   Erio, Ido-Ile, Ipole-Iloro, Aramoko, Oke Imesi, Erinjinyan and Ikogosi in Ekiti West LGA.

The constructed public toilets will be handed over to Public Toilet Management Committee (PTMC) for sustainable management, while Private Operators will be locally recruited to suitably operate and maintain the Public toilets through innovative public contracts. The public toilets will be operated using a business model, and revenues realised from user charges will be deposited in a Sanitation Revolving Fund, which is a financing mechanism for development of sanitation infrastructure in the small towns, at household and institutional levels.

Why the world should chart a path toward tackling climate change