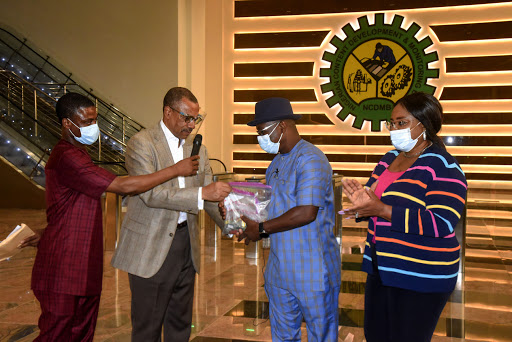 The Nigerian Content Development and Monitoring Board (NCDMB) on Monday took formal possession of its newly completed 17-storey headquarters building from the major contractor of the project, Megastar Technical and Construction Company (MTCC). The symbolic handover of the keys to the edifice was held at the facility located along Ox-Bow Lake Road, Swali, Yenagoa, Bayelsa State. The event has paved the way for the formal commissioning of the building by President Muhammadu Buhari expected to hold soon. The handover and commissioning will be followed by gradual relocation of NCDMB personnel and operations from the offices at Opolo and Onopa, both in Yenagoa to the new building. The Managing Director of Megastar Technical and Construction Company, Arch. Harcourt Adukeh handed over the keys to the Executive Secretary of NCDMB, Engr. Simbi Kesiye Wabote.
The Nigerian Content Headquarters was conceived in the early years of the Board, but formal construction commenced in 2015. The entire project comprises 17 floors office complex, which was christened Nigerian Content Tower, 4 storey multi-level car park and a 1000-seater capacity conference hall and other ancillary facilities. In his comments, the Executive Secretary applauded the technical competence of the main contractor, and other sub-contractors, highlighting that they delivered a world class project within the specified timeline. He confirmed that the Board utilized the project successfully to create jobs, impact skills, procure local goods as well as change the landscape of Bayelsa State.
Represented by the Director, Planning, Research and Statistics, Mr. Patrick Daziba Obah, he commended the safety records achieved on the project, particularly for the fact that there was no Loss Time Injury (LTI). He stated that “beyond just giving us a beautiful edifice, the project safety statistics have been very impressive for a building of this size.” He described the completed NCDMB Headquarters as a clear demonstration that Nigerian companies can deliver complex projects to the desired quality level, cost and schedule, if given opportunities. He hinted that the handover marked the beginning of another key phase in the activities of the Board as it will require a step up in its assets management capabilities.
Arch. Harcourt Adukeh stated that the project employed over 600 Nigerians at the peak of construction, with over 70 percent of them drawn from Bayelsa State. He expressed delight that a good number of the workers were women and they had been mobilized to other construction sites and would also work for Megastar in forthcoming projects, in view of their proficiency and dedication. He extolled the Executive Secretary of NCDMB for deploying his rich technical background and projects experience, which helped to ensure the success of the project. “We would say that we are highly privileged to have a client like NCDMB, their timely response and unalloyed support paved way for the success we have recorded”, he said. He confirmed that the company executed a total of 4,916,223 manhours on the project and worked for 1,542 days on site without any Loss Time Injury (LTI).
While appreciating the consultants that worked on the project, he pleaded that Nigerian contractors should be given more opportunities as they can deliver projects with bigger expectations. He also thanked President Muhammadu Buhari and the Minister of State for Petroleum Resources, Chief Timipre Sylva, for facilitating timely approvals which contributed immensely to the delivery of the project.