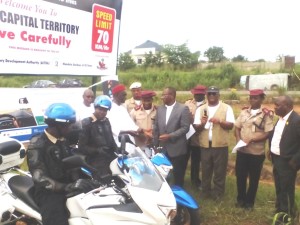 THE Enugu Akwu-Achi community in Oji River Local Government Area of Enugu State, have applauded the kind gesture of their illustrious son and a staff of Chevron Nigeria Limited, Victor Chimaobi Anyaegbudike, who recently embarked on the rehabilitation of Obodo Ukwu – Umuike – Inyi link road in the community.

The road project which commenced on Saturday December 26, was highly appreciated by the community who had hitherto suffered untold hardship in commuting on the road.

In a report by real news correspondent, The community applauded the kind gesture which they described as “unprecedented,” and pointed out that Anyaegbudike has continued to contribute to the development of the community through his generous contribution to the resuscitation of electricity supply in the community, donations to the indigent members of the community, and provision of water for the people .

Hon. Nonso Chijioke, Councilor, Enugu Akwu Ward, Oji River Local Government Council noted that the rehabilitation of the road is a significant contribution to the social and economic development of the Enugu Akwu community and other surrounding communities in the area.

According to him, the state of the road has been deplorable over the years causing the people to go through immense stress to commute on the road. “With this grading at least, the road has become motorable once again and the people are excited about the gesture by one of their sons, Anyaegbudike,” he stated.

He acknowledged and appreciated the State government’s efforts in constructing about a kilometer of the road previously, and expressed the hope that the community will witness the completion of the road project for the benefit of the people.

In his reaction, Anyaegbudike stated that he embarked on the road project in order to help ameliorate the sufferings of his people. He noted that gesture was a demonstration of the “Tradition of Care” for the community, a major learning from the place where he works.

He expressed delight at the excitement the road project has brought among the people and the lives it will touch in the community, and called for more support to the people in terms of provision of social amenities and infrastructure development.