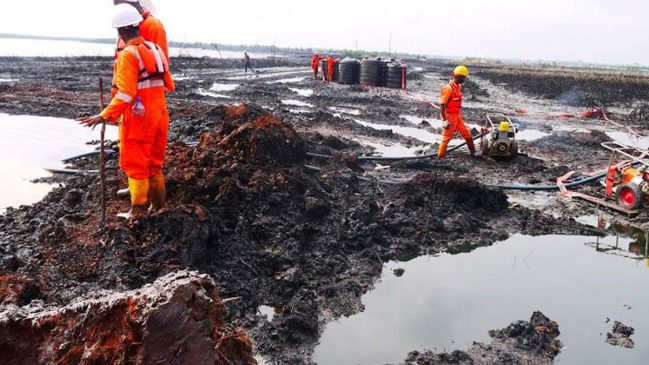 Kjemprud made the appeal while inspecting progress of work at ‘less complex sites’ in Alode community, Eleme local government area in Rivers.

he envoy also called on the Federal Government to take actionable steps to ensure that Ogoniland communities were not re-polluted by operators of artisanal oil refiners operating in the area.

“We are here on the sites to encourage the contractors to deliver their service, according to specifications, so that the land can be re-mediated.

“We are happy on the development, and that many contractors are at different stages of work trusting in the reports we get of the pollution and clean-up process.

Kjemprud said the Norwegian Government was worried that re-pollution of the Ogoni environment would make the clean-up project futile.

“So, now that work is ongoing on the land (less complex sites), we expect that when work begins on water-based polluted areas (complex sites) that all sources of re-pollution must stop.

“The Federal Government should hold oil companies and anyone engaged in sabotage of oil pipelines responsible for undermining this process,” he said.

He expressed confidence that the Hydrocarbon Pollution Remediation Project (HYPREP) would deliver on its mandate, advising HYPREP and contractors handling the project to speed up work.

According to him, the Norwegian Government was the biggest contributor to the United Nations Environment Programme (UNEP).

Dr Marvin Dekil, Project Coordinator of HYPREP, under the Federal Ministry of Environment said the Federal Government was fully committed to the Ogoniland clean exercise.

He said of 80 per cent of contractors on the sites that 30 per cent of them have achieved the expected target while others recorded 40 to 50 per cent milestone.

“Our projection is that within few months, most of the contractors would have progressed to 70 per cent, and thereafter, progress to the final phase.

“So, we are hopeful that within this year that we will have the first set of contractors out of site.

“HYPREP is carrying out a remediation process that is in line with international best practices and constantly monitored by UNEP,” he added.

Dekil, who commended Ogoni people for their peaceful conduct, cautioned against artisanal refining in the area that was capable of derailing the one billion US dollar project.

He also debunked allegations of misappropriation of funds, saying that diversion was impossible due to several local and foreign stakeholders involved in project.