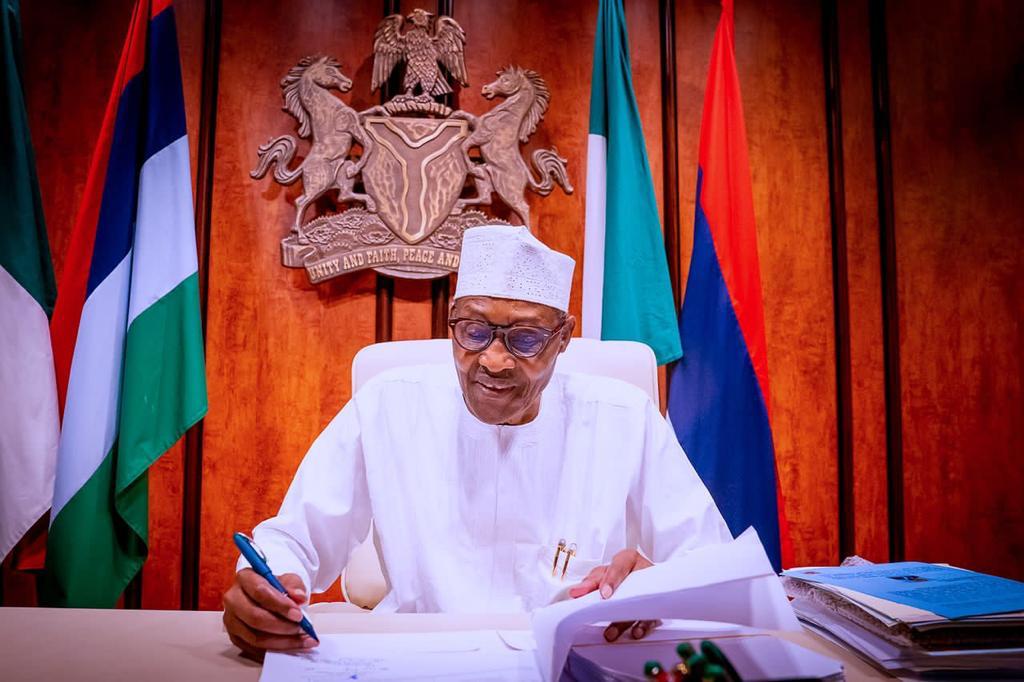 This was disclosed in a statement by the Special Adviser to the President (Media and Publicity), Femi Adesina.

“Working from home in five days quarantine as required by the Presidential Steering Committee on COVID-19 after returning from London on Friday, August 13, the President assented to the Bill Monday, August 16, in his determination to fulfill his constitutional duty.

“The ceremonial part of the new legislation will be done on Wednesday, after the days of mandatory isolation would have been fulfilled.,” Adesina said.

The President signed the bill (now an act) into law despite concerns raised by southern governors and other industry stakeholders regarding some sections of the bill.

The Senate had passed the Bill on July 15, 2021, while the House of Representatives did the same on July 16, thus ending a long wait since the early 2000s.  The bill allocates at least 30 percent of the profit generated by the proposed Nigerian National Petroleum Company Limited for the exploration of oil in ‘frontier basins’, and 3 per cent share of oil companies’ profit to host communities.

However, in a communique issued at the end of their meeting in Lagos on July 6, the

southern governors supported 5 per cent share to host communities, instead of the proposed 3 percent. The governors also rejected  the allocation of at least 30 percent of the profit generated by the proposed Nigerian National Petroleum Company Limited for the exploration of oil in ‘frontier basins’.

“We commend the National Assembly for the progress made in the passage of the PIB. The Forum rejects the proposed 3% and supports the 5 percent share of the oil revenue to the host community as recommended by the House of Representatives.

“The forum also rejects the proposed 30% share of profit for the exploration of oil and gas in the basins,” the communique read.

The governors also rejected the ownership structure of the proposed NNPC, arguing that instead of it to be  vested in the Federal Ministry of Finance, it should be held in trust by Nigeria Sovereign Investment Authority (NSIA) since all tiers of government have stakes in that vehicle.

“However, the Forum rejects the ownership structure of the proposed Nigeria National Petroleum Company Limited (NNPC).

“The Forum disagrees that the company be vested in the Federal Ministry of Finance but should be held in trust by Nigeria Sovereign Investment Authority (NSIA) since all tiers of Government have stakes in that vehicle,”  the governors said.

Also expressing concern on certain provisions of the bill (now an act), as it affects the downstream sub-sector, an oil industry analyst and public affairs commentator, Jerry Lazarus, had said that while the bill removed price controls on petroleum products in Section 205, the senate version of the bill has a clause that constrains market competition by restricting importation of products to only players with local refining capacity, which clearly counters the provision of 205(1).

He also argued that Section 317 (8) of the Senate version of the bill  will create a duopoly in a price deregulated price environment thereby destroying the Nigerian downstream industry as it is known today.

Lazarus said, “This clause needs to be expunged from the PIB. The Authority should be left to develop regulations that are fair, inclusive and transparent for petroleum product importation that ensures open and diverse market supply and hence competition, only then would the objectives of the bill be achieved.  It is worth repeating that as price control is being removed, supply must be competitive, inclusive, transparent and seen to encourage efficiency. Then, and only then will Nigerians and Nigerians win.”

Similarly, the Petroleum and Natural Gas Senior Staff Association of Nigeria (PENGASSAN) had advocated for a single regulatory body for the oil and gas industry in the country, just like it is currently in the banking , telecommunication and the pension sectors. This is contrary to the dual regulatory body proposed in the bill (now an act).

The Petroleum Industry Act provides legal, governance, regulatory and fiscal framework for the Nigerian petroleum industry, the development of host communities, and related matters. It aims  to open up the Nigeria oil and gas industry to investment, strengthen industry governance and regulation to expand, grow and maximize value capture for Nigeria and its citizens.