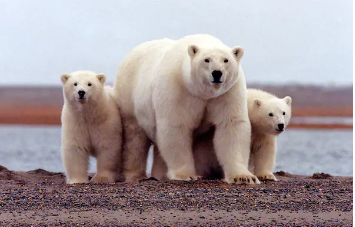 By Juliet Eilperin and Joshua Partlow

The Biden administration on Tuesday suspended oil and gas leases in the Arctic National Wildlife Refuge, targeting one of President Donald Trump’s most significant environmental acts during his last days in office.

The move by the Interior Department, which could spark a major legal battle, dims the prospect of oil drilling in a pristine and politically charged expanse of Alaskan wilderness that Republicans and Democrats have fought over for four decades. The Trump administration auctioned off the right to drill in the refuge’s coastal plain — home to hundreds of thousands of migrating caribou and waterfowl as well as the southern Beaufort Sea’s remaining polar bears — just two weeks before President Biden was inaugurated.

Now the Biden administration is taking steps to block those leases, citing problems with the environmental review process. In Tuesday’s Interior Department order, Secretary Deb Haaland said that a review of the Trump administration’s leasing program in the wildlife refuge found “multiple legal deficiencies” including “insufficient analysis” required by environmental laws and a failure to assess other alternatives. Haaland’s order calls for a temporary moratorium on all activities related to those leases in order to conduct “a new, comprehensive analysis of the potential environmental impacts of the oil and gas program.”

The step, coming just days after the Justice Department defended another drilling project on Alaska’s North Slope, underscores the balancing act the new administration aims to strike as it slows fossil fuel development on public lands. While Biden has paused new federal oil and gas leasing and pledged to drastically cut the nation’s greenhouse gas emissions, he has taken a much more cautious approach toward most oil and gas operations approved under his predecessor.

Last week, Justice Department attorneys filed a brief defending ConocoPhillips’s Willow project, an oil reservoir on the National Petroleum Reserve-Alaska that could hold up to 300 million barrels of oil. The administration also has defended the Trump administration’s decision to issue oil and gas leases in Wyoming and declined to press for the shutdown of the Dakota Access pipeline, a project Haaland protested while serving in Congress.

But Tuesday’s move signaled that the new administration was willing to take aggressive action in an area that has been a rallying cry for environmentalists for decades.

Indigenous residents, including the Gwich’in tribe that lives near the refuge and has battled to keep oil drilling out of the area, celebrated the decision.

“The Gwich’in Nation is grateful and heartened by the news that the Biden administration has acted again on its commitment to protecting sacred lands and the Gwich’in way of life,” a Gwich’in committee said in a statement.

But North Slope Borough Mayor Harry Brower Jr., who represents the only community on the Arctic National Wildlife Refuge’s coastal plain along with six others in the region, said canceling these projects would hurt its residents.

“Federal overreach or in some cases just being ignored is what has crippled the spirit of Kaktovik residents for years when it comes to federal policymakers,” Brower said. “We have to find a better way.”

Oil industry leaders also criticized the Biden administration’s decision and insisted that the wildlife refuge could be developed in an environmentally responsible manner.

But when Trump offered land up for drilling this year, few jumped at the chance. The Jan. 6 sale of 11 tracts in the refuge on just over 550,000 acres netted roughly $14.4 million, a tiny fraction of what Republicans initially predicted it would yield. Only two of the bids were competitive, so nearly all of the drilling rights on the land sold for the minimum price of $25 an acre.

Many major banks in the United States and Canada, under pressure from Indigenous and environmental activists, announced that they would not finance any projects on the refuge. Low oil prices, coupled with the prospect of a public backlash, meant that no major oil companies bid on the leases.

“Trump’s desire to push through this lease sale in January was essentially an empty, meaningless, political gesture,” said Pavel Molchanov, an energy analyst. “And Biden’s decision is in its own way equally symbolic: There is simply no appetite in the industry to drill there.”

As a result, a state agency, the Alaska Industrial Development and Export Authority, emerged as the main bidder. The agency put up all but two of the winning bids. The rest went to a couple of small energy firms.

Alan Weitzner, the state agency’s executive director, said he was surprised and “very disappointed” by the Interior Department’s decision to suspend the leases. He said his group has not been contacted by the Bureau of Land Management, and he wanted to know what deficiencies had been identified by the government.

“From our viewpoint, there are no deficiencies,” Weitzner said. “What we have are seven legal leases with the BLM with the exclusive rights of access for exploration and development on over 365,000 acres.”

Seventeen environmental and Indigenous groups, including the Alaska Wilderness League and Environment America, praised the administration Tuesday but said that they would not be satisfied until the leases were canceled.

“More work remains, however, and we look forward to working with the administration on stronger action to correct this unlawful leasing program and preserve one of our nation’s most majestic public lands,” they said in a joint statement.

Despite Haaland’s order, however, it is unclear whether the administration will find sufficient grounds to cancel the leases outright.

Along Alaska’s northern coast, a major oil company is already making headway on a large project — this time with the Biden administration’s support. The Willow project, approved during the Trump administration, would bring up to five drilling sites, a central processing facility, a gravel mine, hundreds of miles of roads and pipelines to another sensitive Arctic landscape.

That project in the National Petroleum Reserve-Alaska has faced lawsuits, and environmentalists saw it as an opportunity for the Biden administration to take a stand in the fight against climate change. But the administration instead argued in defense of the project.

In an interview Tuesday, former interior secretary David Bernhardt — who pushed to expand drilling on federal land while serving under Trump — said that the Biden administration “has been stunningly bold in seeking delays in litigation” but that it has not departed from the Trump administration in every instance.

In the Willow case, he noted, the Justice Department was already on record opposing a preliminary injunction to halt drilling, and the department had spent roughly $6 million conducting an environmental analysis of the project.

“All of that is a big influence on the subsequent administration’s determination of position, and sometimes they’re more constrained than in other times,” he said.

But Earthjustice managing attorney Eric Jorgensen, who is challenging the Willow decision along with lawyers from several other environmental groups, questioned why the Biden administration would defend Trump officials’ climate analysis in court.

“Thirty years of climate pollution from this oil project will accelerate the global climate crisis, and it is at odds with the Biden administration’s bold climate leadership,” he said, adding that he hoped Interior Department officials would revisit the decision.

Some who live near the Willow oil site view Biden’s support of the project as a betrayal.

Rosemary Ahtuangaruak, a city council member in Nuiqsut, an Indigenous village close to the project, said she is afraid the development will interrupt the annual migration of caribou — a key food source for the village.

“[Biden] led us along with his election criteria saying he would make better choices, especially along the areas of climate change,” Ahtuangaruak said. “So it’s very disappointing for them to speak in one way and act in another.”

“This is one of the largest international energy development projects across the world. And that’s not what he campaigned upon,” she added.

Asked about the administration’s filing in the Willow case and other lawsuits that defended Trump’s energy policies, the White House, Justice Department and Interior Department would not comment.

But on the same day that Biden administration trumpeted its move to suspend leases on the Arctic National Wildlife Refuge, ConocoPhillips issued a statement celebrating that the Willow project had cleared a review by the Interior Department.

“Although the final decision on the Willow Project is still pending, clearing the DOI review represents a very significant milestone for this project,” said Erec Isaacson, president of ConocoPhillips Alaska.“ This is a great example of collaboration and thorough preparation enabling a rational, fact-based decision.”

Fadina Joins the Global Board of Knowledge for Development Partnership