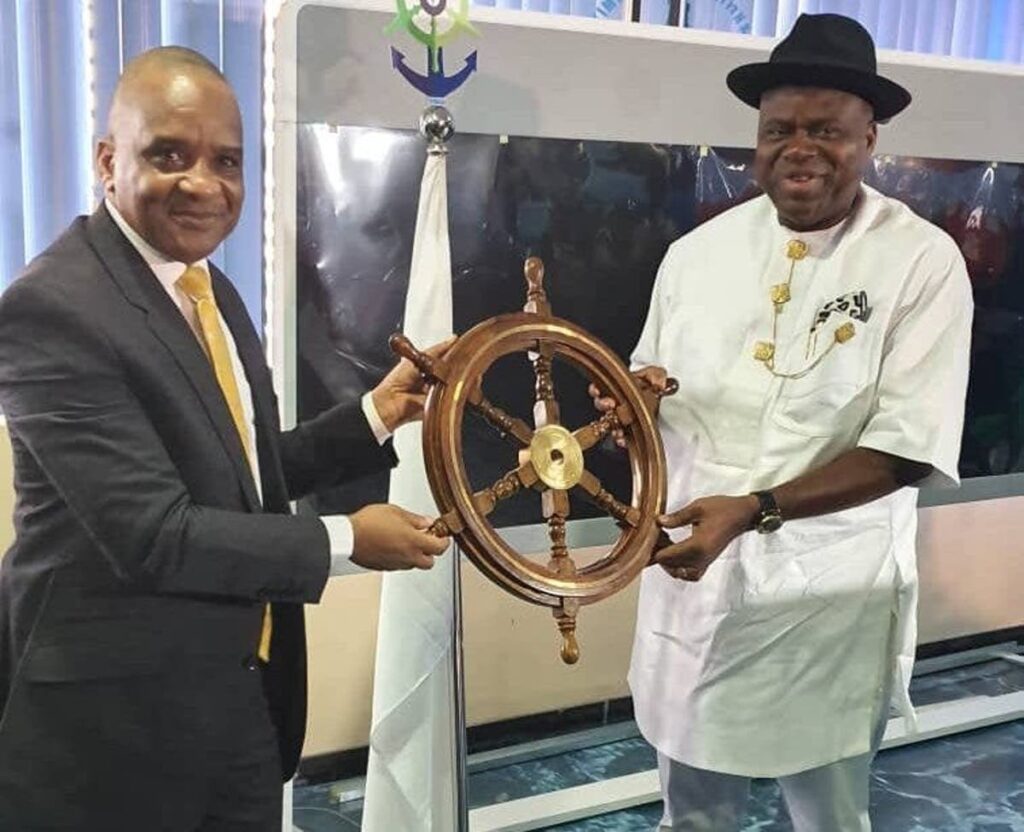 The Government of Bayelsa State has solicited the partnership of the Nigeria Maritime Administration and Safety Agency towards establishing a maritime academy and developing its deep seaport.

Governor Douye Diri who paid a courtesy visit to the NIMASA Director-General, Dr Bashir Jamoh, on Monday in Lagos, said the state had re-opened the process of establishing the academy and recognised the agency as central to actualising the project.

In a statement by the Acting Chief Press Secretary of Bayelsa State, Mr Daniel Alabrah, the governor said, the administration planned to tap into the wealth residing in the state’s maritime environment for the benefit of the nation.

“This is the beginning of an improved relationship between NIMASA and the people of Bayelsa State. We are both bound by a common denominator, which is water. Bayelsa is a wholly riverine state with all its local governments and their headquarters accessible by river and rivulets. Till date, there are three local government headquarters you can only access through water namely Brass, Southern Ijaw and Ekeremor.

“My visit is to further deepen the existing cordial relationship between our state and your agency. A huge part of Nigeria’s coastline is in our state. So we need to join hands together in order to strengthen the maritime domain of our country, “ Diri said.

While calling on NIMASA to take advantage of the opportunities in Bayelsa’s maritime environment by establishing a befitting office in the state, he appealed for synergy with the agency in order to combat sea piracy, kidnapping and other criminal activities on the state’s waterways.

On the building of a deep seaport at Agge, which was commenced by the immediate past administration, the governor said given the economic benefits of a seaport, a strategic partnership with NIMASA was necessary in order to bring it to fruition.

He commended the agency’s seafarer training programme through which the capacity of Niger Delta youths is being enhanced.

However, he called for the engagement of more youths from Bayelsa in such training due to their maritime environment and interest.

Diri urged the agency to clear wrecks on the waterways in the state as they pose serious threat to vessels and result in accidents, especially at night.

The Director-General of NIMASA, Dr Bashir Jamoh, in his response, said the journey to convert Nigeria’s aquatic assets to revenue begins with Bayelsa state because of its strategic place in the country’s maritime environment.

He expressed the agency’s readiness to commence the building of an office in the state as well as incorporate Bayelsa into theC4-i, which is a technology-based communications platform of the agency in synergy with the Navy, Police and the Nigerian Ports Authority.

Jamoh also promised that working within NIMASA’s mandate, the agency would roll out trainings aimed at engaging and improving the youths in the country, particularly those in Bayelsa and Delta states, through the National Seafarers Development Programme (NSDP).