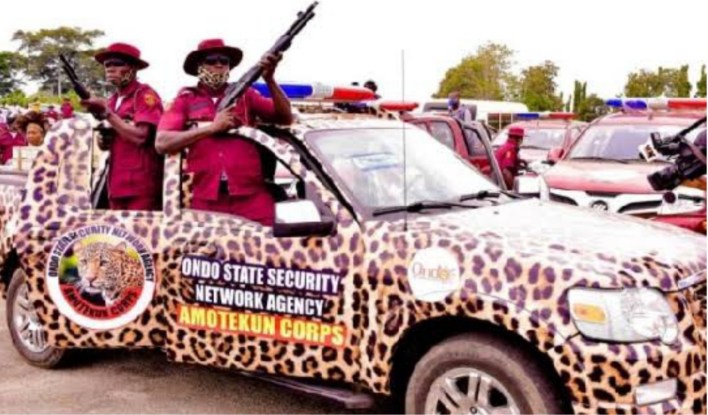 Operatives of the Ondo State Security Network Agency, better known as Amotekun, have arrested no fewer than 15 persons for illegally mining gold in Owo Local Government Area of the state.

The suspects, were said to have been apprehended in about 50 different locations in the local government.

The state Commander of the Amotekun Corps, Chief Adetunji Adeleye, said the arrest was part of efforts to end criminality in the state.

According to him, the suspects were apprehended by the Amotekun corps in collaboration with local hunters.

“The arrest took place at a forest reserve in Owo. It was in the course of the exercise we discovered the illegal mining locations. We noticed that they (the suspects) had gone far in 50 different locations, where they were mining.

“Nobody would have believed that Ondo State has this quality of gold until we got to the locations where the gold robbers were living and performing illegal mining,” he said.

Adeleye said the culprits would be prosecuted after proper investigation.

One of the suspects, said he was introduced to the ‘business’ by his friend, adding that they used a local method to mine in the locations.

He said, “I have been involved in the act since 2019. I came to look for a job and I was introduced to the business by one of our leaders, who is at large. He brought me to Ondo State for this job because I wanted to make some money.”

On how they mined, he explained that after digging deep into the ground, “We got the black gold and separated the sand from the gold with a flat sieve with a rug. The rug will do the separation as we pour the sand on it.

“I am the second best in getting the gold, as it is of a very high quality. We only get it out and send back home to our boss who sells them and later pays us. The gold in the land is of high-quality; mostly we get 25 carats and 20 carats gold and we make good money,” he added.

Uganda Bullish on Oil Deal with Total, Cnooc by March