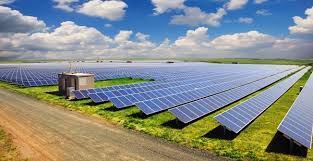 The Biggest in West Africa

The National Electricity Company of Burkina Faso (Sonabel) has inaugurated a 33-mega solar power farm at Zagtouli in the Central Region of Burkina Faso.

Estimated at €47.7million, the project which forms part of the broader infrastructure and energy development agenda of the government of President Roch Marc Christian Kabore, was funded by the European Union, French Agency for Development and the Government of Burkina Faso.

With about 129,000 panels and 32 inverters, the project is currently the biggest solar plant in the West African sub-region.

Currently, the country imports about 150 megawatts of power from Ghana, representing 40 per cent of its electricity needs.

Conducting a group of journalists from neighbouring West African countries round the facility as part of a working tour of the country, the Project Manager of the facility, Mr Souleymane Konate, said the project formed part of the agenda of President Kabore to provide cheap and affordable power for the people.

He said solar constituted approximately five percent of the energy mix of Burkina Faso and expected to increase to about 40 per cent the power needs of that country in the next five years.

“As part of the President’s vision to industrialise the country, there was the need for not just power, but also one that was cheap, sustainable and affordable as well.

“It is in the light of this that our president in 2016 commissioned the solar project,” Mr Konate emphasised.

He further stated that, “The promotion of the use of solar energy as part of the country’s energy mix is projected to be increased by five per cent by 2020. This is intended to address power disparities between urban and rural areas and it is in line with this objective that a Renewable Energy and Energy Efficiency Agency (ANEREE) was created.”

Konate said apart from the fact that solar energy was cheaper and also one of the cleanest forms of energy, its adoption was in line with climate change adaptable programmes.

“We expect to produce up to 600 megawatts by 2025. The current customer price per kilowatt is around 75f; when we manage to increase our capacities, we will be able to envisage a reduction in this cost borne by the consumer,” he added.

The whole project was commissioned in June 2016 and inaugurated on September 27, 2017 with the capacity to produce 33.7 megawatts, but its operation actually started in 2018.

There are 16 other solar power projects currently going on and their completion would urge the country towards the attainment of its 30-percent threshold of solar energy.

The Chinese are tearing us apart – Janet Adeyemi