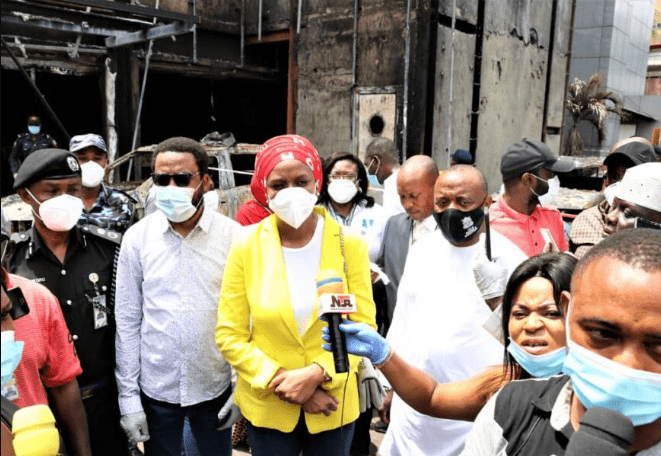 No fewer than 300 hoodlums invaded the headquarters building of the Nigerian Ports Authority (NPA) on October 21, 2020 to loot and burn part of the six-storey building.

NPA Managing Director, Hadiza Bala Usman, who made this known to  journalists after an on-the-spot assessment of the damage on Sunday, said the hoodlums also burnt 27 vehicles and vandalized 33 others in wake of the violence that trailed the protest against police brutality in the country.

The protest, tagged #EndSARS, started peacefully on October 3 but was hijacked by hoodlums leading to violence and attacks on public and private properties.

The NPA Managing Director also stated that six of the hoodlums have been apprehended.

“The attackers at the headquarters numbering over 300 persons gained access into the premises at 8:42am on Wednesday, October 21, 2020, from the outer Broad Street wing brandishing daggers, sticks and cutlasses.

“After attacking, disarming and chasing the security personnel on duty out of the headquarters premises, the attackers proceeded to burn 27 vehicles and vandalise several others belonging to the authority and some members of staff. They thereafter set a wing of the office building on fire.

“Upon knowledge of the attack, officers of the Nigerian Armed Forces were invited and deployed to the premises. They successfully dispersed the hoodlums and reclaimed possession of the premises following which the authority’s firefighters were able to gain access into the building and put out the raging fire,” Bala Usman revealed.

She informed Journalists present that upon assessment of the extent of the damage, it was discovered that apart from the annex wing that was burnt, many offices were vandalised, while computers, printers, water dispensers and other electronic devices were looted.

“A total of 27 vehicles including cars, utility vehicles, pick up vans and staff buses were set on fire while 33 other vehicles, 22 of which belong to members of staff, were vandalised. A Toyota Prado SUV, a Bajaj motorcycle and one Hilux patrol van were also stolen from the premises.

“The military personnel that came were able to apprehend some of the hoodlums. They have been detained and are with the Nigerian Navy while necessary action and prosecution will commence.”

The NPA Boss said the quantum of damage was yet to be ascertained and until insurers complete an integrity test of the building, the value of properties and items lost cannot be given.

“Once we are able to conclude with our insurers, we will now provide the exact amount of value of what has been lost. There is an ongoing integrity test that is being done on the areas that has been burned to determine the integrity of the building and the lost adjusters are also going to be engaged to proceed on the necessary insurance cover,” she said.

Describing the attack as disheartening, Bala Usman said the situation has not affected port operations in any way as NPA has continued to render its services unhindered.

“Our network and systems have been functional. Within two days of the incidents, we have been able to resume all port operations and ensure that critical information and documents are safe. All our financing and payments have been protected and not in any way affected.

“As part of measures to guard against further breach, military personnel have been deployed to provide adequate security at the facility and at all port locations across the country,” she said